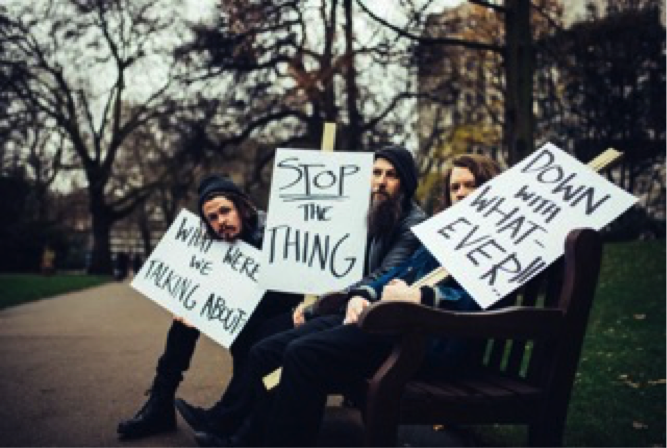 LTNT are set to release their up and coming E.P ‘YODE’via Canine Riot on July 13th,2018

‘YODE’is full of raw energy, punk rock attitude and blistering 3-part melodies. Debut single ‘Happy Days’ is a relentless force to be reckoned with, with its heavy sludgy guitars and hypnotic chorus while ‘Fuck Bunny’takes more of an experimental approach but nevertheless resonates with that classic LTNT dark humour.

The E.P was produced by Liam Lever, Shaun Morgan and Matt Hyde.

“YODE is an introductory selection of songs from a session at monnow valley studios, marking a new and unexpected era for LTNT. We thought maybe the band was dead but after some drastic changes and some dramatic improvements, we’re back with less bollocks and better songs” – vocalist Liam Lever.

On Shaun Morgan’s (Seether) involvement “Since shaun and I met we’ve been on a lot of dates. Pottery classes, salsa lessons, things like that. So as we grew closer it was only a matter of time before we became involved musically. He really believes in what I’m doing and has helped in every way he could, from signing us to canine riot to coming over to monnow valley to co-produce the record to inviting us to support every seether show we can get to. He is like a brother except he doesn’t beat me up or make me eat dog shit” – Liam Lever

One of LTNTs driving forces are their superb live performances which have seen the band tour with the likes of Brant Bjork, Chevelle and Seether. The attention also secured the band a spot at Reading and Leeds Festival two years in a row where the BBC named their set ‘the best of Festival Republic stage.’ LTNT have also played Handmade Festival, The Great Escape and Camden Rocks, Download Festival and Y-Not Festival