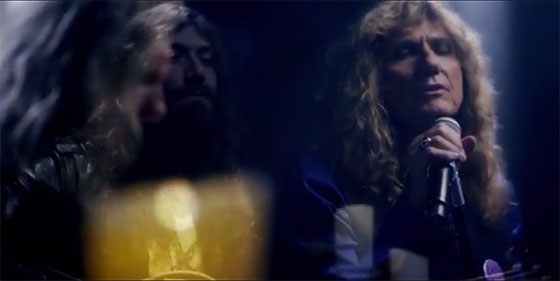 In this month’s Classic Rock, David Coverdale and Dave Ling get a bit tetchy over the new Whitesnake record. Our Andy loved it – and it appears he’s not alone

Rock icons Whitesnake continue to show why they are a musical force to be reckoned with. The Purple Album was released last week via Frontiers Music Srl and has stormed the charts around the globe. In the US, the latest release landed at #6 on the Top Current Hard Music Albums, #15 on Top Current Rock Albums, #43 on Top Current Albums and #83 on the Billboard Top 200 Charts. Around the globe, you can also find The Purple Album at #18 in the United Kingdom, #9 in Finland, #17 in the Czech Republic, #11 in Switzerland, #34 in Norway, #18 in Sweden (#1 on the Hard Rock Charts in Sweden), #13 in Germany, #24 in            the Netherlands and #8 in Japan.

“The Snakes & I are thrilled with the incredibly positive response to The Purple Album. Our sincere thanks to ALL for the amazing support we’re receiving for the album & The Purple Tour!!” exclaims David Coverdale.

The Purple Album is a re-imagination of classic songs from David Coverdale’s time as the lead singer for Deep Purple’s Mark 3 and Mark 4 studio albums. The album is currently available on Amazon in a deluxe edition format (http://geni.us/WSPurpleDLXamz) featuring 2 bonus tracks, 4 music videos and a Behind the Scenes feature on the recording of the album. A standard edition is also available and can be ordered here:  http://radi.al/WSPurpleREGamaz and digitally via iTunes at:http://radi.al/WSPurpleiTunes.

Whitesnake is also planning to release a limited edition box set of The Purple Album on June 30th. The box set includes the deluxe edition of the CD alongside a 180-gram, 2 LP vinyl version, a poster and sticker as well as a limited edition lithograph and can be ordered here:  http://radi.al/WSLtdEditionBoxSet. The 180-gram vinyl, also available as a stand-alone piece and can be ordered here: http://radi.al/WSPurpleLPamaz.

Whitesnake have released four different videos (a combination of traditional music videos and static YouTube clips) for songs from The Purple Album. Added together, these videos total have received over a million plays and counting, showing that fans new and old still love this iconic material, band and vocalist. From the opening notes of the classic track “Burn,” to album closer “Stormbringer,” Whitesnake are back and better than ever. Songs like “Lady Double Dealer,” “Soldier of Fortune” and “Sail Away” are given a new energy in the very capable hands of the current Whitesnake line-up featuring David Coverdale on vocals, Reb Beach and Joel Hoekstra on guitars, Michael Devin on bass and Tommy Aldridge on drums. A video for the first single “Stormbringer” can be seen here: http://youtu.be/Xk9wWj8Wh30. The track “Burn” can be heard at: https://youtu.be/q7UxOrBb0Is and “Lay Down Stay Down” can be heard at: https://youtu.be/I7_j7Qn2FSs. The video for “Soldier Of Fortune” premiered on CraveOnline.com (http://www.craveonline.com/music/articles/853381-video-premiere-whitesnake-return-stoic-soldier-fortune), and is now live and can be seen here:

Whitesnake will also be hitting the road this month in support of The Purple Album. The upcoming world tour kicks off in the U.S. on May 28th in Airway Heights, WA. The 42-city trek runs through the summer wrapping up on August 16th in St. Charles, MO. The tour will be making stops in Las Vegas, NV; Beverly Hills, CA; Atlantic City, NJ; and Orlando, FL among others. The band will be performing songs from The Purple Album as well as countless hit songs from their catalogue including “Here I Go Again,” “Is This Love,” and “Still Of The Night.” Tickets for all shows are on sale now and more information and purchase links can be found at:http://whitesnake.com/WS2013/features/purplealbum/index_dates.php.

Whitesnake was formed in England in 1978 by Coverdale. The band has released multi-platinum selling albums throughout the years and have been known for hits such as “Slide It In,” “Here I Go Again,” “Still Of The Night” and “Is This Love.”