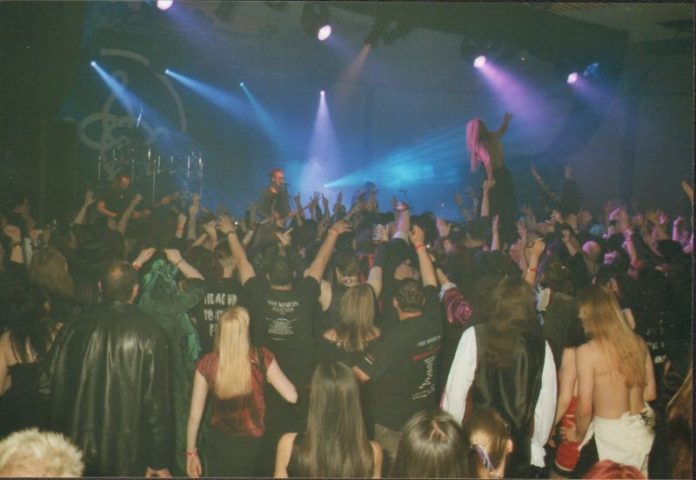 No sooner than the spa has been crooned, rattled and shaken by the likes of Wayne Hussey, The Red Paintings and more last month, it’s already back to work for us planning the next one!

The line up for November 4th & 5th is absolutely superb, with legends such as Heaven 17, Sigue Sigue Sputnik and The Mission queuing to test the Spa’s foundations, and they’ve also got one of Yorkshire’s finest, Chasing Dragons on the bill and stalwarts such as Manuskript – there’s something for everyone!

Friday, November 4th 2016
Kitty in a Casket
One of the hallmarks of psychobilly, flying in from Vienna astride a nuclear warhead. Catchy riffs, catchy lyrics and a hell of a lot of fun. With such slots as Wave Gotik Treffen and supporting the Dead Kennedys under their belts, they’ve gained a lot of prestige in only eight years – but haven’t lost a bit of their attitude.
http://www.kittyinacasket.com/

Manuskript
Practically a mainstay (by popular demand) at Whitby Goth Weekend – appearing fairly regularly since 1994 – this will be their thirteenth appearance- Manuskript are cult heroes to young and old in our audience. Upbeat, fun, and particularly acclaimed for their cover of Rock Me Amadeus, you can guarantee a lot of dancing, a lot of fun and a lot of applause.
http://www.manuskript.club/

Sigue Sigue Sputnik Electronic
The latest incarnation of the 5th Generation of Rock and Roll, with Martin Degville and a whole host of digital wizardry, is returning to Goth Weekend – stepping sequins and heels onto the Pavilion’s stage for the third time. Ever glitzy, ever glamorous and every bit as surprising as Degville’s first demos, this is pure rock and roll electro royalty. With bare rear ends and feathers.
http://www.sputnik2.com/

Heaven 17
It’s been 36 years, but Glenn Gregory and Martyn Ware are still hard at work performing as one of the North’s finest entries into the Synthpop genre. Still packed with energy, humour and a wicked back catalogue, the unstoppable partnership has never quite run out of steam – and after a massively positive reception to their first WGW in 2014, fans have been clamouring for their return to the Spa. Rousing renditions of chart classics are guaranteed!
http://www.heaven17.com/<http://www.heaven17.com/>

Saturday, November 5th 2016
Chasing Dragons
Incendiary, powerful melodic hard rock – post hardcore bursts, thunderous vocals and overflowing alt metal – one of the first groups to play at Leeds pride, and growing ever since, Chasing Dragons are the perfect pump of passion and power to the alt-rock scene. The group have been sighted at Chebfest, Upload, Rockwich, Sophie Lancaster events and more in 2016 and we’re pleased to join their already packed calendar!
http://www.chasingdragons.co.uk/

Children on Stun
Since 1991, Children on Stun have been a mainstay in Goth clubs. Reforming for a sold out gig in 2015, the band were all set for their original line up to provide only the finest in British death rock – only to be shaken by the loss of guitarist Simon Manning only a couple of months later. Now, with Stuart Harper slipping on those veritable leather boots, the group play on to jovial audiences across the United Kingdom.
http://www.childrenonstun.webeden.co.uk

Skeletal Family
Yet another on our line up from Yorkshire; and yet another hallmark of ‘Classic Goth’ – with a bit of positive punk mixed in – to boot, Skeletal Family are one of the 1980’s biggest unexpected success stories. An independent label, low budget releases and a positive outlook managed to drive them to the top ten for months. Decades on, the group still achieve widespread acclaim – and Promised Land continues to be a ‘must-have’ on alternative DJ sets. Surely there’s no group more fitting to lead in for The Mission!
http://www.skeletalfamily.com/

The Mission
Possibly the most anticipated headliner in Goth Weekend history – and following a whirlwind reception from Wayne Hussey’s solo performance in April 2016, The Mission are one of the biggest names in Gothic Rock. To try and fit their immense career into one paragraph is impossible. It’s their 30th anniversary, and with a new album on the way, they’ve already found themselves adding extra dates to their substantial European tour schedule, thanks to huge demand. To make things even sweeter, they’re offering superb ticket add-ons guaranteeing exclusive and backstage access. Wow!
http://www.themissionuk.com

ABOUT WHITBY GOTH WEEKEND
As ever, Whitby Goth is an all ages event. We welcome – nay, encourage – families to attend and introduce the next generation of alternative music fans. With concessions for kids and families alike, there’s no reason to leave anyone behind!
Now in its 22nd year, Whitby Goth Weekend is still one the largest and most successful independent, home grown festivals in the UK – and is continuing to attract world-renowned talents. Whitby Goth Weekend is estimated to produce a whopping £1.1million for the town’s local economy per annum, and has generated thousands for charities such as the Bat Conservation trust and the Sophie Lancaster foundation.

The event is celebrated as an icon of the alternative movement, having been studied, visited and explored by television, newspapers and radio over the years, and has, despite all this, remained utterly independent throughout its run. Growing voraciously from its origins as a forty-person pen-pal meet up in 1994, it now attracts thousands from all over the globe, not only to wander among like minded folk, but as a colossal meet up between friends – all from word of mouth, with no sponsorship and no outside funding.
After two decades, the team is still built of friends and family, all in house, and the town now handles between 8,000 and 10,000 people a year, drawn entirely by the spectacle of top hats and tailcoats roaming the town’s Victorian streets.

Diversifying every annum, the event attracts all manner of subcultures, with a melting pot of the alternative population now making regular appearances and meetings to the sounds of a hugely varied series of groups, all of which, in some way, have influenced, or been generated from, one of the world’s most recognisable movements – Goths, punks, steampunks, Rockers, Bikers and more – everybody is welcomed!

Tickets are available now, with concessions for under 16s and families.