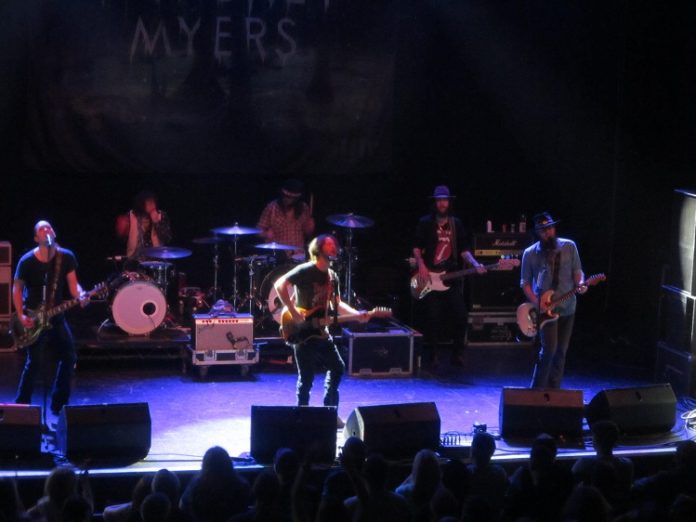 At about 10.45PM tonight Whiskey Myers take their bows. As they do, after an hour and 45 minutes of just about the finest Southern Rock you will see anywhere in 2019, Dr. Hook’s classic “Cover Of The Rolling Stone” plays them out.

As it does, the mind wanders back to December 2016, when downstairs in this building, guitarist John Jeffers told me when I interviewed him, that his aim for the band was to come back and play the “big room” above.

Ok, its not quite the cover of the Rolling Stone, but tonight – and via a sold out show in between in the middle room – the goal is achieved, and as a thousand West Midlanders belt out the words to “Deep Down In The South” it is fair to say, perhaps, that they’re crossing over into something a little bigger too.

Essentially, they are just the same now as they were back then. Give or take bassist Jamie Gleaves is in and that John David Kent and his re-enactment of Jethro Tull with a cowbell is now a full-time member, Whiskey Myers haven’t changed a bit despite a number one album back home.

That is to say they still play southern fried rock n roll with a country twist, and if you think you’ve heard it before you probably have, but you haven’t heard it this good for ages, nor have you ever seen a band who looked more like they were born to do this.

Cody Cannon is a quiet frontman, but has a mesmeric quality to go with his talents and “Frogman” sees the whole band in full flight straight from the starting gun. Their cover of the wonderful Brent Cobb’s “Bar, Guitar, And A Honky Tonk Crowd” is a stomping early highlight, and likewise when Cody Tate takes the mic  for “Cut From A Different Mold”, the feeling is no, they aren’t, but they are more than capable of following in the footsteps of the giants who came before.

“Early Morning Shakes” the title track of their breakthrough record, rubs shoulders with the US mega-hit “Mud” more than capably, but it is a new song, “Gasoline”, that most surprises. Arguably, the most rock n roll thing in their considerable arsenal, it is a screeching statement of intent, and one which shows they are still keeping it all fresh.

“Ballad Of A Southern Man” treads the path and is from the lineage of tunes that makes us all think everything below the Mason-Dixon line is idyllic, “Bitch” gives Jeffers his turn in the vocal spotlight, and “How Far” is one of a few that become jam-like, sort of Gov’t Mule if you want a hook, but this, surely, is mere proof that WM could be anything they choose.

Most bands would be off milking it for an encore. This outfit, though, doesn’t need their ego stroked. They know they are on form. Thus “Stone” gives way to “Rockin’ In The Free World” and the band merrily cut loose one last time.

Which brings us back to Dr. Hook.

And really, the way Whiskey Myers have calmly, and largely under the radar, built their career over this last decade, I am not betting against them achieving anything they set their minds to.