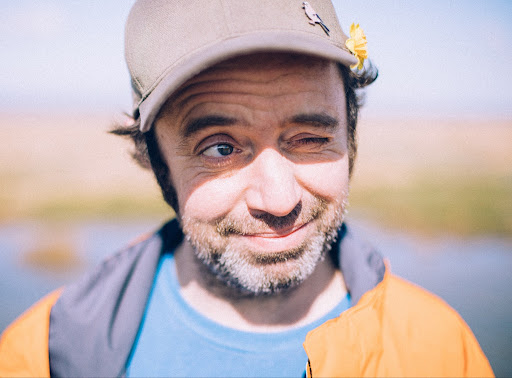 “Not Everybody Thinks We’re Doomed”, says Beans on Toast in his beatific new single.

Taken from his eagerly anticipated new record ‘Survival of the Friendliest’, it’s a chipper new track from an artist completely high on life. As Beans states:

“I love life. I’m constantly inspired by the crazy world in which we find ourselves. The road ahead may not be an easy one, but I refuse to believe it’s all for nothing and that we should roll over and quietly wait for extinction. If that’s the future we imagine, then that’s the future we will get. We need to visualise a better future. We need to adapt, and we need to celebrate the things worth celebrating. That’s what this song is, a celebration of life and our future. Bring it on. Chaos and all.”

Rolling with the positive themes of “Not Everybody Thinks We’re Doomed”, its cheerful video stars Mollie Cook, a dental nurse from Lancashire, who used her time away from the surgery during lockdown learning to skate like a pro.

Adding a notable spring in Beans’ step, the song’s backing arrangements are by Blaine Harrison and Jack Flanagan of the Mystery Jets, both of whom play throughout his upcoming album: ‘Survival of the Friendliest’.

With Blaine Harrison also tasked with producing the record, he recalls of the experience:

“I was honoured when Beans asked if I would help bring his new songs to fruition, and from the opening notes of his demos for ‘Survival of the Friendliest’ I knew it was going to be a very special album. Recorded in sequence over two weeks on the North Kent coast, under the watchful eye of the ‘Queen of the Waves’—who became something of a guiding spirit for the songs: A love letter to the natural world, a celebration of our human resilience, an archaeological dig into the ancient laws of trespass and our statutory right to roam, a renewal of wedding vows, a rally call against pessimism, and a toast to self-acceptance and kindheartedness. Magic bullets for difficult times, and timely reminders that sometimes the only way through is by giving each other a leg-up over the fence.”

‘Survival of the Friendliest’ is a record all about hope, positivity and camaraderie that chooses to celebrate the very best of human nature.

Recorded at Big Jelly Studios in Ramsgate, the album features a host of friends & musicians including the spoken-word artist Dizraeli, acclaimed author Nick Hayes (on banjo), multi-talented gospel singer Sarah Telman (backing vocals, strings), Rosie Bristow of Holy Moly & The Crackers (accordion), Adriano Rossetti-Bonell (saxophone) and Graham Godfrey (drums), alongside the Mystery Jets. With every fibre made with a little help from his friends, the cover art for the album is by London based painter Georgie Mason; whereas its videos come courtesy of old school friend and wildlife photographer: Curt Walsh.

‘Survival of the Friendliest’, will be released on 1st December 2021 via his own BOT Music imprint. An album about friendship, about creativity and humanity and about why those three things are important, it’s exactly what the world needs now.

In support of the new album, Beans on Toast will be touring some of the UK’s finest independent venues with his brand new live band, which will feature many of the artists who contributed to the record. Split into two runs, tickets are on sale now. Support comes from Camden’s finest KITTY LIV.