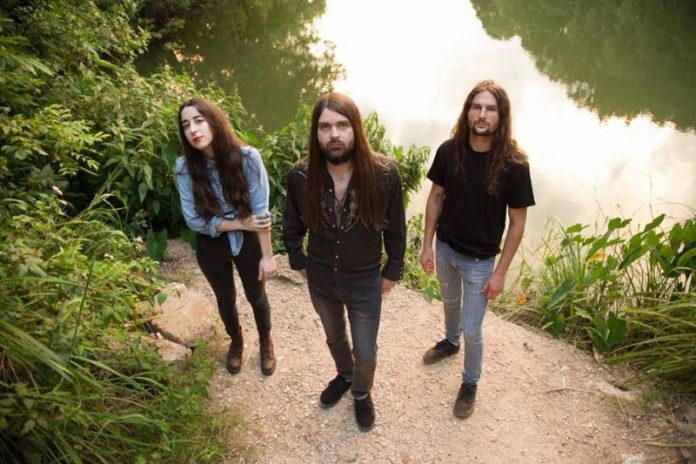 The Well was also recently prominently featured on The Walking Dead star’s Ride with Norman Reedus TV show on AMC. Not only has the band composed and recorded the series’ original theme song, they also appeared on a recent episode with Reedus, an avowed fan of the band and all things RidingEasy.
The impressive crux of Pagan Science, the sophomore album by Austin trio The Well, is that It’s a multiplicity of itself. From the band’s dual male/female vocals to their transcendently timeless sounds and erudite lyrical themes, Pagan Science is crystalline in its complexity and clarity at the same time.
The Well walk an intriguing line between authentic early 70s doom/heavy psych and the more frayed-edge-of-sanity weirdness of their hometown’s legendary noise rock scene, whilst also splicing in shades of chamber choir vocals, occult rock and dark folk.
Sonically, Pagan Science picks up where The Well — bassist/vocalist Lisa Alley, guitarist/vocalist Ian Graham and drummer Jason Sullivan — left off with their widely heralded 2014 RidingEasy debut Samsara. Here, the band’s heavy psych, proto-metal sound growing evermore vast, yet more focused on hooks, and their lyrics more conceptually intricate. Part of a running thread throughout the album’s introspective lyrics is the notion that the world outside of one’s own mind is also a creation and reflection of the interior world of that mind. And, just like the band’s sound is one thing (undeniably heavy) and simultaneously another (dark folk, blues… there’s even a Crosby, Stills & Nash cover, “Guinnevere”), it’s this multiplicity that makes Pagan Science such a captivating record.
Pagan Science was recorded with producer/engineer Chico Jones at Micro Mega Studio in 2016. Jones also previously engineered the band’s debut album Samsara with producer Mark Deutrom[Melvins, Sunn0)))] in 2013. Samsara, released late September 2014 was ranked the #1 debut album of 2014 by The Obelisk and widely praised in the press. Likewise, the band’s intense – some even say “possessed” – live performances have earned them featured slots at Austin’s Levitation Fest in 2015 & 2016, as well as tours with Kadavar, All Them Witches, Black Tusk and more.
The album kicks off with a looped vocal harmony launching a slithering guitar riff and thunderous drums on “Black Eyed Gods” in which the band’s dual vocalists sing in unison throughout like Byzantine monks. “Skybound” starts with a fast churning riff with vocals run through heavy delay and reverb until the drums cut out briefly, then, dropping to half-time the song becomes a massive psychedelic throb as the vocals continue to loop onto themselves above the proceedings. “A Pilgrimage” takes a slower groove, accented by pulsing congas and single note Middle Eastern sounding guitar progression. “Byzantine” begins with monk-like chants, swelling cymbals and droning guitars building up to pounding toms until it all coalesces in a massive eruption. “Choir of the Stars” slowly builds over a lugubrious bass line as a snarling slide guitar weaves throughout, while haunting sounds of yelping coyotes echo in the background. The song ends in a pig-like guitar squeal as “Brambles” begins beneath. Syrupy guitars merge with Alley’s and Graham’s unison vocals to form a slowly building monolithic sound describing a paranoid chant. Throughout,Pagan Science channels the supercharged no-frills hard blues of Blue Cheer and Deep Purplewhile adding multiple layers of effects, entrancing vocals and the dark thrill of a funhouse hall of mirrors.
Pagan Science will be available on LP, CD and download on October 14th, 2016 via RidingEasy Records.