Australian’s ready with the third part of their trilogy

After successfully unleashing the first and second installments of  ‘The Ages’ to both sold out audiences and critical acclaim, Australian extreme metal quintet Hybrid Nightmares are gearing up for part 3 – ’The Third Age’ – to be released on the 20th of July 2015. ‘The Third Age’ continues to explore the downfall of man as the powers of good and evil struggle for control of a dying world. Fans can expect the music to grow even darker and heavier to reflect the dire narrative of  ’The Third Age’.

All the hallmarks of a great Extreme Metal band are here: whirlwind rhythms, hypnotic arrangements, churning black moods, triumphant melodies. A hybrid of the best elements of Extreme Metal. Austrailia’s Hybrid Nightmares are a band that refuse to restrict themselves to any one style of Metal and are able to capture a sound that transcends genre and reflects a diverse spectrum of influences and inspirations. Always eager to defy expectations, offend and entertain. 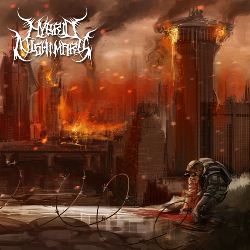