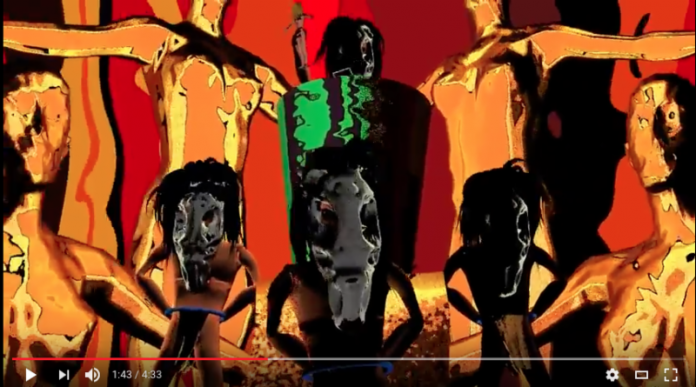 Los Angeles psychedelic power trio Sand premiere the video for their new single “Haggard Hawk” today.
The 3-D animated clip was directed by Joe Presser (Netflix, CNN motion graphics designer) and available to watch & share.
Sand hit the road later this week for shows supporting Minus The Bear. Please see dates below.
Drummer/singer Dylan Ryan formed Sand in 2012 after writing a batch of songs between tours with Cursive and Rainbow Arabia. He recruited bassist Devin Hoff (Julia Holter, Cibo Matto) and Tim Young (Reggie Watts’ Late Late Show band) to fill out the group. What began as a dynamic fusion unit has become a heavy psychedelic power trio lined with nods to porto-metal. They have have two releases on progressive music label Cuneiform Records and are currently plnning the release of another recording in 2017.
Regarding the video, director Joe Presser says, “The song has a bouncy sort of feel with odd time signatures, so I made all the cameras as close to hand-held as I could and angled them to parallel that rhythmic angularity. Cel-shaded in highly contrasted 3-D animation, and referencing 70s B-movie tones, warriors swing skip-its atop four-horned, overgrown wildebeests like something out of the No Fear folders in your five-star binder. A shaman shakes a Polaroid and a Stretch-Armstrong/Barbie effigy in preparation for a ritual reminiscent of a vintage Nickelodean sliming.”
SAND LIVE:
03/10 Boise, ID @ Knitting Factory Boise *
03/11 Salt Lake City, UT @ The Depot *
03/12 Denver, CO @ Summit Music Hall *
03/13 Omaha, NE @ Reverb Lounge
03/29 Los Angeles, CA @ The Satellite
* supporting Minus The Bear