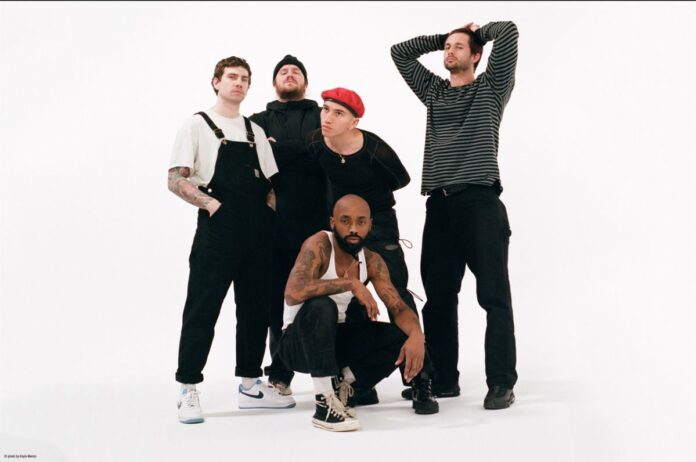 Hardcore outfit JESUS PIECE have announced their sophomore LP, …So Unknown, due 14th April 2023 via Century Media Records. To celebrate the news, they’ve also shared the single and music video for ‘Gates of Horn’.

JESUS PIECE gallantly broke onto the scene, turning heads for their feral live shows and grandiose, melodic songwriting which has since cemented them as standard stirrers and boundary-breakers. On …So Unknown, their Century Media debut, listeners ascend to the apex of metal and hardcore– where a mix of complex instrumentation is led by a manic, shaman- like vocal delivery from frontman Aaron Heard. It’s a cluster bomb of ten anthems, bursting at the seams with memorable riffs and pulsing with fresh ideas. Drummer Luis Aponte promises, “This is as close to a JESUS PIECE experience as you’re going to get without standing in front of us.”

Their new single, ‘Gates of Horn’ infuses industrial ambiance juxtaposed against start-stop rhythms, breathing and blasting before merging towards a terrifying, swinging groove. Its accompanying video, directed by Eric Richter, takes viewers through a series of recurring nightmares. “The number one thing is the live performance,” says Aponte regarding JESUS PIECE‘s venomous live reputation. “You can be in the studio and make that record sound insane but if you’re not giving that same energy, that same feeling when you play live, it just doesn’t matter.”

Heard uses a livewire vocal delivery, ala Busta Rhymes, to orchestrate the crowd’s kinetic energy— pushing further toward utter mayhem and culminating in a show that stands tall among their genre peers and live music writ large. JESUS PIECE is a live phenomenon, only possibly held back by a heretofore limited recorded output. Their time has come with …So Unknown, the follow-up to their white-hot Only Self.

Co-produced and mixed by Randy LeBouef (Every Time I Die, Orthodox) and clocking in at a lean and mean 28 minutes, …So Unknown documents the lives of the bands’ five members as they step into life’s abyss and react to the changes. “The making of the record was nothing short of all-consuming. It was an intense and challenging process,” recalls Aponte. “The record reflects a lot of confusion, but also, evolution. There was a lot of uncertainty and emotion during the pandemic– we all changed and grew so much. So if there is a single thought or concept to the record, it’s constant metamorphosis. That’s also how we operated as a band on this LP– spending a lot of time songwriting and fleshing things out as a unit, and then upping our game from there. It’s definitely a reflection of us as more mature, playing the best we’ve ever played and feeling like a real band for the first time.”