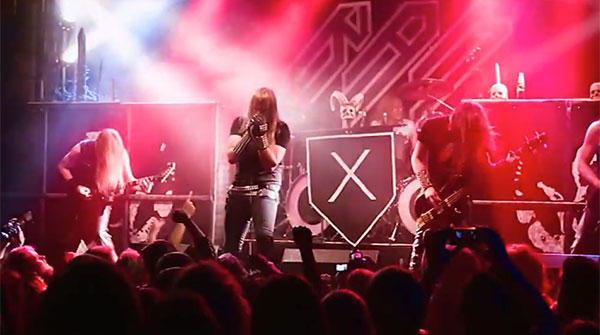 Horns up for the Swedish classic metallers

Svbversvm is the impending new full-length from Swedens classic heavy metal stalwarts, RAM. Boasting ten raging hymns of death, post-apocalyptic dominance and total devastation through iron that recall the power and prestige of some of metals most revered acts (Judas Priest, Mercyful Fate, et al.) without replicating them,RAMs fourth studio offering was self-produced at Black Path Studios, mixed at Welfare Sounds by Olle Björk, Per Stälberg, and RAM, mastered by Daniel Johansson and will be unleashed on October 30th worldwide via Metal Blade Records. In Europe, Svbversvm will come available as a limited CD/DVD digipak, as well as on CD and vinyl.

In collaboration with Germanys Rock Hard Magazine, today RAM offers up a clip of “Awakening The Chimaera” taken from the bonus DVD, X Anniversary, A Decade Of Heavy Metal Tyranny Concert which comes free with the limited edition digipak of Svbversvm, was filmed on Friday the 13th of September 2013 at a hometown show in Gothenburg, Sweden.

Additionally, you can still listen to first single, “Eyes Of The Night”, at http://www.metalblade.com/ram where you can also find various pre-order bundles as well as the second single, “The Usurper”, courtesy Of Heavy Blog Is Heavy RIGHT HERE

“We are very pleased with the album that is the product of four months of being locked up in the studio and offering our very last drop of sweat and blood for it to become the most massive RAM production ever,” said the band of their latest endeavors. “This is our latest assault upon the rotting world, may it be a dagger in the heart of the powers that may be! Svbversvm is at hand!”