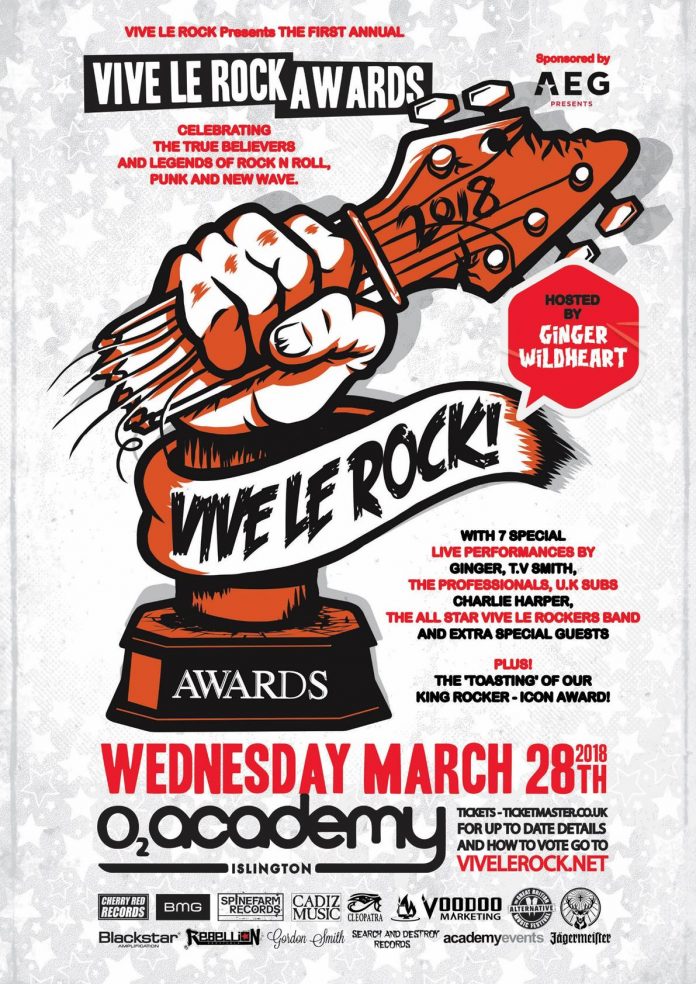 Since launching in 2010, the magazine recently celebrated its 50th issue and has consistently championed the true spirit of rock n’roll, from the legends that conquered the world in the 1970’s and 80’s, to the new acts who keep the spirit fresh and alive. ‘The First Annual Vive Le Rock Awards’ is a chance to celebrate the music and lifestyle and give credit to those that are long overdue.

This star-studded affair will feature an awards presentation, live performances by award winners, guest performers, and the awards house band; The Vive Le Rockers, who will host the winners songs in a ‘Late Night’ chat show style.  Alongside that, the ‘Legends’ award will see the winner ‘toasted’ in a comedy style by their friends and peers culminating in an All Star Jam.

Today we can confirm that one of the bands confirmed to perform on the night will be post-Sex Pistols legends The Professionals, who returned last year with a critically-acclaimed new album (voted ‘Album Of The Year’ by Vive Le Rock last December) and have been thrilling audiences with their high-octane rock n’roll ever since.

“I can’t wait for this!,” exclaimed frontman Tom Spencer. “I’ve already put a big black cross the day after in my diary. It’s gonna be loud, proud and messy”.

“Viva Le Rock? Didn’t I see that on a t-shirt somewhere?” remarked ex-Pistols drummer Paul Cook. “Who’d have thought, 40 years later it’s the awards to be at!”

If anyone truly deserved an award, it’s U.K. Subs frontman Charlie Harper, who excels the true spirit of a lifetime in rock n’ roll more than any other. He’ll be picking up his King Rocker/Icon Award, a prize truly deserving for a man that was ‘born a rocker…’

“It’s a good excuse for a free drink,” confessed Charlie. “I can’t wait for the awards party. It will be great to meet up with so many old friends. Let’s hope it’s supported really well and see you all there. “

“It’s a great honour to be holding the First Annual Vive Le Rock Awards and saluting the legends who ruled the world but often get overlooked when it comes to acknowledging their greatness,” stated publisher Eugene Butcher. “We’re planning a lot of surprises for a wild night where the audience, the bands, the winners and presenters can come together as one to rock the O2 Islington Academy like it’s never been rocked before! “

Held over the two rooms of the O2 Islington Academy (main room and the smaller room- acting as the V.I.P/photo room/aftershow party), 300 carefully invited guests and 200 paying punters will witness a sensational show with unique collaboration’s and 11 awards given away by famous presenters and our compere.

The Awards will be hosted by guest performer Ginger Wildheart, alongside awards presenters Steve Diggle from the Buzzcocks and rocker and biggest selling singles artist of the 80s, Shakin Stevens.

Former frontman of punk legends The Adverts, TV Smith, is also confirmed to play live with many more live performers and presenters to be announced yet. Are you ready to Vive Le Rock?

To VOTE go to www.vivelerock.net