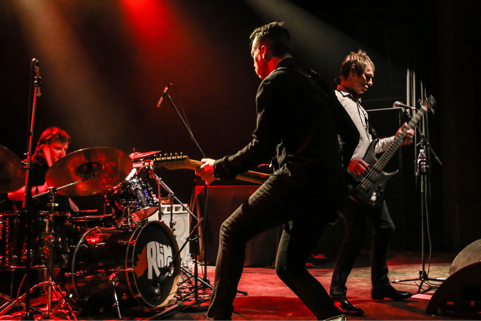 In a rare break from his day job as the bass player with Status Quo, John ‘Rhino’ Edwards releases a rockin’ new single, One Note Blues, to celebrate the forthcoming ‘Save The Rhino’ headline tour.
Following a successful run of shows in January as special guests on the King King tour, the band are playing eleven UK shows starting on March 31st, and they will be donating money to the Save The Rhino International charity from the proceeds of the tour.
‘I’ve always had a connection with Save the Rhino. I organised a charity concert at the school my sons were at, and we donated the proceeds to Save the Rhino, who then came and gave a talk. It really hit home to me about how endangered they are as a species, and these days I would think funds are hard to come by. So it’s high time Rhino’s Revenge did its bit. There’s an exclusive badge we’re selling, it’s only a quid and the money is straight to the charity, plus we’ll be personally donating from the money we take on the door. So even if you don’t want any merchandise, put a quid into Save the Rhino.
Plus there’s the small matter of my nickname, though I doubt there’s many rhinos with a wine issue. Their loss…’
Rhino promises “right riveting rock and roll, played with serious panache, attitude and humour. I guarantee you’ll leave with a smile on your face. How many bands can you go to see that, in the course of 80 minutes, will play songs about ISIS,Trump and my dog Stan? It’s great tongue in cheek fun.“
Rhino’s Revenge also has a new line-up for the tour. “I liken Rhino’s Revenge to a football team from the lower league that relies on players from the Premier League who come in on loan. They then return to their parent club after slumming it with me. I’m incredibly lucky to have such high calibre musicians that want to play with me, especially considering the money on offer! This time out I have Richard Newman from the Paul Rodgers band on drums, and there will be 2 different guitarists, Jim Kirkpatrick from FM on the first run then Craig Joiner from Romeo’s Daughter until the end. I’ve changed the line up to a 3 piece band as well now. It’s more demanding but there’s extra room to mess with things. Heady times at Revenge Towers.”
Save The Rhino Tour:
March
Sat 31st The Holbrook Club, Horsham http://www.rhinosrevenge.com/
April
Fri 6th The Iron Road, Evesham  www.wegottickets.com
Sat 7th Bluefunk Rhythm & Blues Club , Stockport bluefunkclub.wixsite.com
Fri 13th The Half Moon, Putney tickets.halfmoon.co.uk
Sat 14th  Vic Biker’s Pub , Coalville www.wegottickets.com
Sun 15h  The Diamond, Mansfield  http://www.rhinosrevenge.com/
Thur 19th  Bootleggers, Kendal  www.bootleggersbar.com
Fri 20th  Octagon Live, Keighley www.theoctagonlive.com
Sat 21st  Backstage at the Green Hotel, Kinross www.ticketweb.uk
Sun 22nd  Eleven, Stoke-on-Trent  www.ents24.com
Wed 25th The Priory, Dover  http://www.rhinosrevenge.com/
European shows
Thur 26th  La Boule Noire, Paris
Fri 27th  Das Parkhaus, Duisburg , Germany
Sat 28th        Bürgersaal am Bahnhof, Rotenburg an der Fulda, Germany.
May
Sat 5th:         QuoFest 10, Port Laoise, Ireland.
Released by Molano Music, One Note Blues is taken from Rhino’s Revenge II, an energetic and diverse album that celebrates music, and comes 15 years after the band’s debut album.
Rhino’s Revenge lI was recorded in ’11 days of pure magic’ with his sons Max on drums and Freddie on guitar, and multi-instrumentalist Matthew Starritt.  Rhino’s daughter, Mae, also contributed backing vocals to the album, produced by Mike Paxman (Judie Tzuke, Uriah Heep, Asia, Status Quo).
“I play Rhino Rock, Thug Rock, Animal Rock, Heavy Rock, Pop Rock, but with the main focus on the lyrics and the songs. It’s rabble-rousing rock ‘n roll.”
Rhino’s Revenge II is an aural treat, with no calculated image or reliance on nostalgia: instead Rhino and the band have created an atmosphere based around strong material, and succeed in immersing listeners into the ambiance they have made. The album is the perfect manifestation of John ‘Rhino’ Edwards’ immutable wit, sadness, quiet anger and charm.
Along with One Note Blues, the album features 11 further songs that deal with a wide range of subjects from vacuous aspects of modern life though to man’s best friend.
This is a quintessentially English album and there’s something indefinable but very special about Rhino’s Revenge II that makes it irresistible.  Rhino Edwards, a confessed musicoholic, has created a truly honest album which ‘kicks like a mule’; a rare commodity in today’s world.
To order Rhino’s Revenge II go to www.rhinosrevenge.com
https://www.facebook.com/rhinosrevengebandhttp://www.rhinosrevenge.com