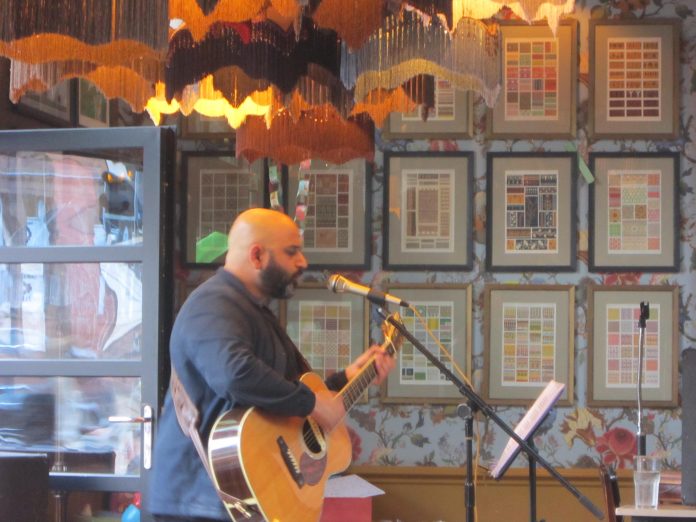 The Moseley festival is an annual music, arts, culture and food event, which takes place in the Bohemian suburb of Moseley in England`s second city. There are street stalls, lectures and a variety of musical proceedings. One in particular, really took my fancy at The Sorrento Lounge, a former Lucas Garage now converted into a relaxed bar / restaurant with shabby chic décor, It was a local singer songwriter called Vijay Kishore topping the bill at `The Sorrento Shindig`. I have seen Vijay`s enthralling performances on a number of occasions and he`s always worth making the effort to get see. Tonight, was no exception.

The evening`s proceedings kicked off with a song about unrequited love with `Come On Over` before a newer song, the melancholic `Little Robin`

A moving song that I really love gets an airing with `Bones` and it`s thoughtful lyrics “Final kisses still taste sweet, sound of snow crushing under my feet” and the heart wrenching strap line of “Tell Me It`s Over” it`s a song that always leaves me bewildered, it`s so simple but so wonderfully compelling.

We get a slightly country tinged version of `Done My Time` before `13 Rounds`, `Black Magic` and the stunning `Tornadoes` a reflective song which seems to be about a life crisis rounds off this short but stunning set. It`s not too long before this troubadour is encouraged to play one last song, which he happily does with the riveting `Au Revoir` before that`s it and we are left to recover, reflect and digest what we`ve heard.

I`m always left with the same question after observing a performance by this talented artist and that`s why the hell isn`t he getting the plaudits he richly deserves but at the same time, it`s like having an exciting secret you don`t want to share, a guilty pleasure. Tonight, as usual we were given a mesmerising, spell binding and at times, almost hypnotic performance from a musician with a wonderful reverberating vocal range, complimented by his dexterous guitar playing and inspiring lyrics.

I`m sure this secret can`t remain hidden for too much longer.