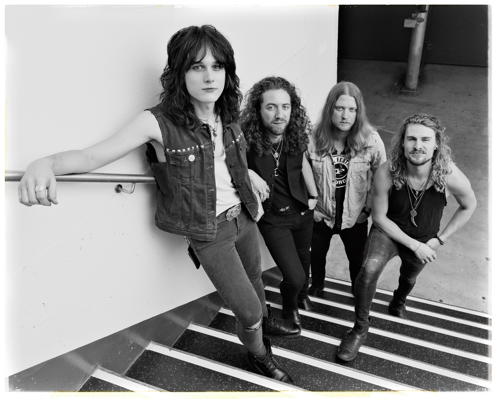 TYLER BRYANT & THE SHAKEDOWN return to the UK in December for selected headline dates, plus a debut performance at Planet Rockstock in South Wales.

This visit follows on from the band’s appearances at Download, British Summer Time Hyde Park & Ramblin’ Man Fair earlier in 2017 – high-profile outings in a year of near-constant activity that has seen the Nashville-based musicians sharing global stages with some of rock’s most legendary names (AC/DC, Guns N’ Roses, Tom Petty & the Heartbreakers, Aerosmith, Deep Purple, ZZ Top) as well as completing work on their latest self-titled studio album.

Produced by TBSD themselves and mixed by John Fields (Soul Asylum, Paul Westerberg), this 11-track outing – set for worldwide release via Snakefarm Records, a fresh imprint under the Spinefarm Records banner, on November 3rd – features a brand new set of varied and infectious songs, including epic rocker ‘Aftershock’ (already a staple of the live show), plus lead single / lyric video ‘Heartland’.

Since kicking off their recording career in 2013, TBSD (that’s Caleb Crosby on drums, Graham Whitford on guitar, Noah Denney on bass and backing vocals, and Texas-born Tyler on guitar and vocals) have killfully mixed legacy and tradition with a youthful, energetic heartbeat – a heady combination that has earned them a truly formidable live reputation.

Says TBSD: “Since our first visit to the UK, we’ve had such a warm and welcoming reaction from the audiences, and it’s simply been a case of, “how quickly can we get back?” We’ve played some amazing festivals, as well as stadium shows there, but we’re really looking forward to this December run; firstly, the new album will be out, and secondly because shows in more compact venues can often be the most memorable. We love to be up close and personal with crowds and feed off of their energy. These headline dates will be special, and we’ve got Planet Rockstock to look forward to as well, which everyone tells us is a rad event run by great people. Roll on December!”