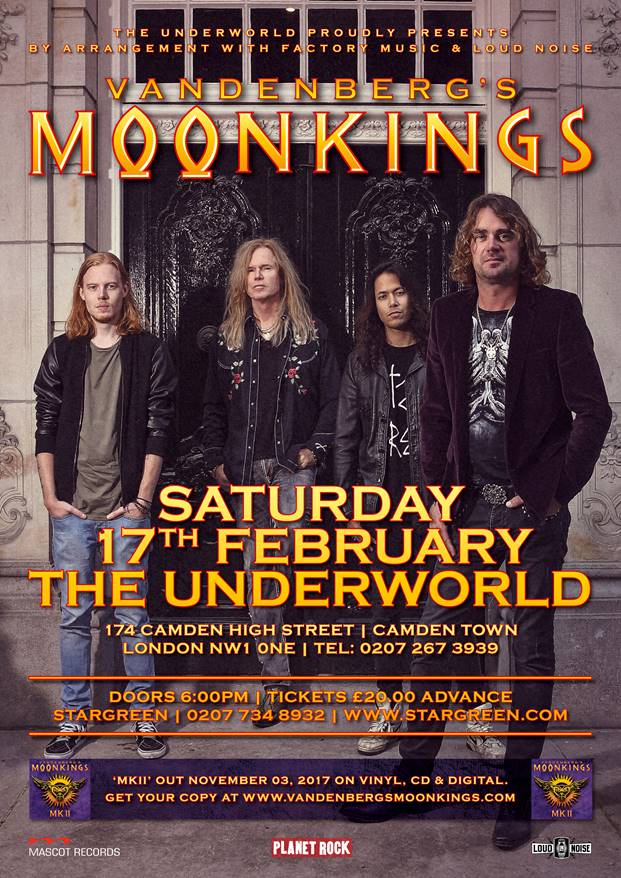 Classic Rock icon Adrian Vandenberg will be bringing his Vandenberg’s MoonKings to London on Saturday 17th February 2018 for a night of high octane rock and roll.

They will be playing London’s down and dirty rock n roll hub The Underworld to play songs from their new album ‘MK II’ which will be released on 3rdNovember 2017 via Mascot Records.

Talking about coming to London, Vandenberg said, “We can’t wait to finally play London again, very excited! If necessary we’d swim that bloody channel with our Marshall stacks on our backs: WE COME TO PLAY!”

Four years after Adrian Vandenberg made a spectacular comeback with Vandenberg’s Moonkings the band return with a sophomore album, simply titled ‘MK II’. The album has all the qualities of the debut: once again the four-piece band manage to create a perfect blend of vintage seventies and heavy rock. Adrian Vandenberg shines as a bonafide guitar virtuoso, while the rest of the band deliver a powerhouse performance.

“The last few years have been very important indeed”, confirms Adrian Vandenberg, who shot to world fame as the guitarist and songwriter of Vandenberg and Whitesnake. “We just got to know each other when we recorded out debut album. I think we all exceeded each other’s expectations. But you really get to know each other while on the road. It was then that I really became impressed by the abundance of energy that this band has. We tried to capture this on our new album. At the same time, we all grew individually. I am really amazed by the way Jan Hoving has grown even more in his role as a singer and as a front man. I’ve played with the best bass players and drummers in my extensive career, but with all respect I dare to say that Sem Christoffel and drummer Mart Nijen Es form the best rhythm section I ever had the pleasure of working with.”