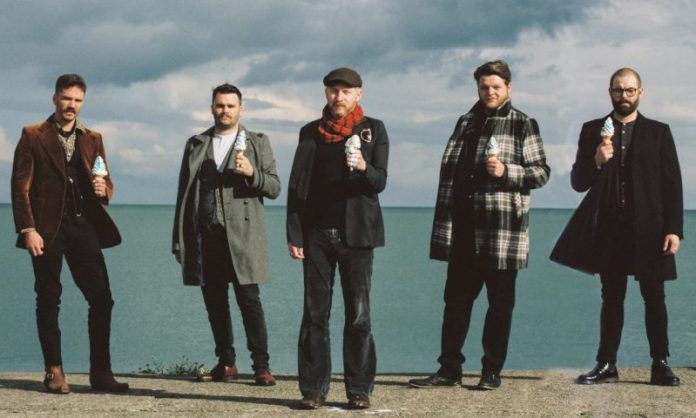 Acclaimed Dublin folk quintet The Eskies return with their second album, ‘And Don’t Spare The Horses‘ out 1st December.

Returning to the foot stomping gypsy folk that has already won them an army of fans, ‘And Don’t Spare The Horses’ leaps from genres as vast and varied as folk, klezmar and yiddish to rock, swing and blues. And it’s content? As eclectic as their sound according to the band – “Melodramatic tales of woe, betrayal, conflict, upheaval, rebellion, love, loss, fear and anger,” says the band. “All wrapped in tongue-in-cheek irreverence and self-deprecation, occasionally giving way to a flurry of triumphalism or whisper of introspection.”

Recorded at the Orphan Studios in Dublin earlier this year, the band set about to document the last year and a half of their musical meanderings, under the watchful gaze of producer ‘Captain’ Gavin Glass (Lisa Hannigan, John Grant, Billy Bragg). Whereas 2015’s debut ‘After The Sherry Went Round’ garnered praise for having “enough inherent energy to charge a power plant” (The Irish Times); with the new album the band were keen to showcase new dimensions to their sound.

Highlights include the opening lead single, ‘All Good Men’ – a full on, big band, swing sounding romp, snarling and growling its way through three and a half minutes of roaring brass and crowd harmonies and ‘Building Up Walls’ which begins with a low drawl, before erupting into an anthemic refrain. ‘Hail, Hail’ is a Poe-esque lament for a long lost love set against the backdrop of a sea-soaked spaghetti western, whilst ‘Death To The Sentry’ is probably the purest folk song on the album, complete with haunting four part harmonies, channelling poets Seigfried Sassoon and Wilfried Owen in a tale of the horrors of war, dread and the longing for home.

Contrast all of this with the breakneck speed of ‘Napoleon’, the fist pumping chorus in ‘I’m Not Sorry’ and the Mardi Gras feel of ‘Shame’ and you have a truly vast and varied record in The Eskies second offering.

‘And Don’t Spare The Horses’ is out 1st December. Pre order now from www.theeskies.com and iTunes