Track By Track: Not Today – Headway 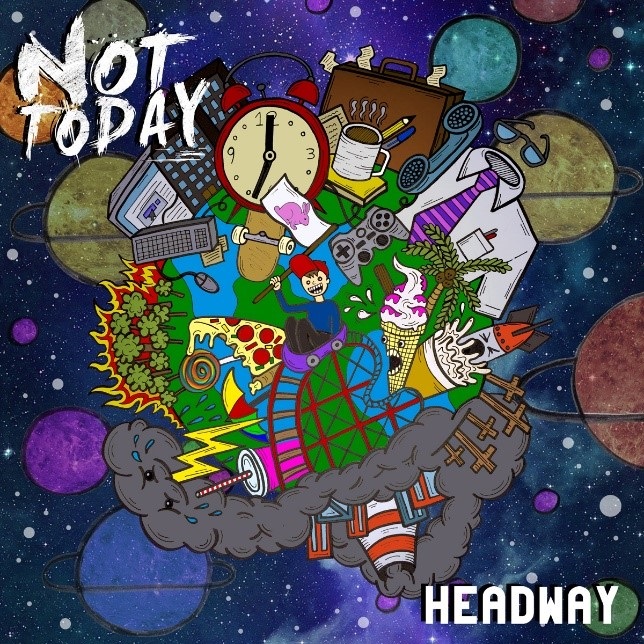 PMA with pop punks. They talk us through it all

With a band name inspired by a line in Toy Story, it’s evident that the quintet are all about looking on the brighter side of life. Sophomore E.P, Headway, is a musical testament to that fact, its 5 tracks bubbling with bright, upbeat effervescence. “When it comes down to it, pop punk is an absolute blast to play,” says vocalist Alex, his PMA unshaken by the crowded state of the UK pop punk community; “The scene might be a little saturated, but we try to make sure that our music isn’t paint by numbers pop punk and has its own character”. Now the band discuss, track by track, what you can expect from the EP…

“Our debut EP Infinity was darker in themes and we wanted our next release to be a lot more positive. We were collectively at much better places in our lives and we believe that the music reflects this.

Track 1: Worth My Time – A version of this song was written at the very start of 2015 and just missed out on being put on our debut EP “Infinity”. Once we got into the studio to start work on Headway, we completely rewrote the chorus and parts of the verses on the spot which recrafted it into the song it is today. We’re really glad that we did that as we’re really proud of how it sounds! Lyrically it’s about us, both as a band and as a group of five friends and our pledge to each other to take this band and our music as far as we physically can.

Track 2: This Song Sounded Better In My Head- Alex had already wrote the lyrics for this song months prior with no music and Kris had the intro riff originally wrote as metal riff that he reworked into a major key. When we moved into our rehearsal space back in September, Kris showed the riff to Mitch, who then tweaked it slightly, and it all started from there. Simon wrote his drum parts and Sam wrote his lead parts as well as the breakdown in the same practice session – it’s the fastest a song of ours has come together and is certainly one of the most fun to play. It’s got a real easycore vibe to it, with two breakdowns, positive lyrics and gang chants. Lyrically, it’s about doing what you want to do and standing up for what you believe in in the face of adversity.

Track 3: Coming Storm (feat Daniel Jeffrey)- This song actually was in the very early stages of the writing process before we even finished our first EP. The song was shelved and forgotten about until around May last year and it’s been a firm favourite of ours ever since. It’s easily the darkest and heaviest one on the record, and took the longest to get perfect in the studio – the lead tone alone has multiple different delay effects on it! We recorded this song in Drop B as a last minute decision and Simon really pushed himself in getting the best possible drums to keep the song fast and punchy. Daniel Jeffrey is the vocalist of Inherit the Stars and came recommended to us via our fiend Liam Connolly who is their manager. He absolutely killed it and we’re so proud of how the song came out. Live, this song is an absolute blast to play, it’s fast paced, it’s aggressive and it’s pretty technical in places.

Track 4: These Few Months- This is our standard acoustic song. Alex wrote and recorded everything on this track and is a very important song to him. Lyrically it’s quite melancholy, and laments the end of a relationship a few months after the breakup, once the emotions have calmed and the dust has settled. And in our opinion, this isn’t your generic pop punk break up song!

Track 5: Growing Backwards– This song has roots back to 2010 where Mitch wrote this as a demo for his old high school band back in Ilkley, a sleepy town on the outskirts of the Yorkshire Dales. It never materialised into anything and frankly, we’re glad it didn’t. This song was recorded for our first EP but we just weren’t happy with how it came out at all and so it was rerecorded in a different tuning and altered for this record. We couldn’t be happier with this track and it was the obvious choice for lead single. It’s anthemic, it’s got a killer guitar solo and it has a catchy singalong just before the last chorus.”