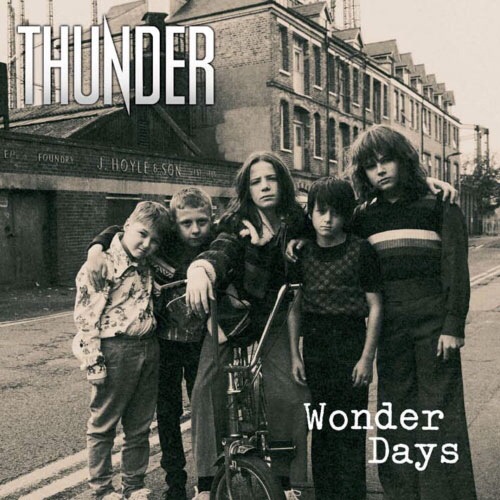 Rock’s most notorious liars make glorious return to the fray

There’s a classic episode of The Simpsons, from back when it used to be funny, when the punchline to a particular gag is Homer saying: “Oh, he’s been lying to us through song, don’t you hate it when people do that?!”

With the greatest respect to everyone’s favourite yellow dad, he should acquaint himself with Thunder.

They’ve split up twice. The last time, they swore it was for good. Then they came back for some Christmas shows, then they supported Journey (blowing them offstage in the process), then all of sudden they announced plans for a new record. It’s enough to make you dislike them for telling porkies. Or at least it would be if they weren’t so stone-cold brilliant.

When things ended last time, in 2008, following the “Bang” record, it was said that it was because singer Danny Bowes didn’t want to sing anymore. This in itself is a crime, given that the fella is so fantastic at it, and it was further alleged that the rest of the band weren’t too happy about the break up. Still, they found other outlets. Guitarist and main songwriter Luke Morley formed The Union, Harry James on drums went and joined Magnum, Snakecharmer and loads more, bass man Chris Childs found a home in an Eagles tribute act. Bowes himself became a booking agent and band manager, playing the odd acoustic gig with his former bandmate Ben Matthews along the way (Matthews has been battling throat cancer and is absent from “Wonder Days”)

The odd thing, though, was that when Thunder had quit they were on a career high, and their crowds were still huge. And when they came back to play live it merely re-enforced how good they were. Take their show at the Calling Festival last year. Its not an exaggeration to say they went down as well as headliners Aerosmith. This was and is a band that needed to make a record.

Bowes had said he wasn’t prepared to make the tenth Thunder album if the songs weren’t strong and you can see his point. After all no one wanted some Only Fools And Horses style dogs dinner of a thing where a cherished favourite returns with something crap, and in doing so tarnishes their reputation. It takes about five seconds of the opener, the albums title track to convince that all is good at Thunder Towers.

Beginning in a manner that’s akin to “She’s So Fine” from that seminal debut 25 years ago, “Wonder Days” (the song) is classic Thunder in more ways than one. First, it just sounds right, then there’s the lyrics. Morley is always at his best when he’s feeding Bowes lines to sing about being lucky. So this one has them looking back on younger days, “desperately trying to be cool,” before forming a band “like all the other misfits” and getting girls without knowing why. It’s the perfect start.

From there it’s “The Thing I Want” which gives us the other classic Thunder tenet over the years, that they’ve pulled a fit girl and aren’t quite sure how they’ve done it. Building like “Everybody Wants Her” from years and years back, it’s a fantastic hard rock song.

So far, so Thunder then. But just when you think you – and they – have it pegged “Wonder Days” (the album) helter-skelter’s into as many different directions as it fancies. “The Rain” for example, is a lilting countryfied ballad that could be a Steve Earle song, “Black Water” is full of disturbing imagery, while “Serpentine” sounds for all the world like Queen’s “Crazy Little Thing Called Love,” as it tells it’s tale of rather rude things.

But it’s “The Prophet” that really makes you sit up and take notice. Lyrically it’s an excoriation of Simon Cowell and his ilk (a theme that the band have done before) but it’s a full-on gallop worthy of Iron Maiden, and unlike anything Thunder have attempted in other work.

Of course it wouldn’t be Thunder without a huge ballad, “Broken” is just that, and it wouldn’t be Thunder without a celebration if classic rock, which “When The Music Played” – with it’s brilliant line of “I’m glad I’m old enough to recall when rock was young” fulfils admirably. Elsewhere “Resurrection Day” is simply made to be a single, if anyone still releases them.

By the time “….Days” ends, with a simple but joyful rock n roll freak out of “I Love The Weekend” you are left wondering why they ever split up. No matter, they are back (for now) and proving why they are they are so vital.