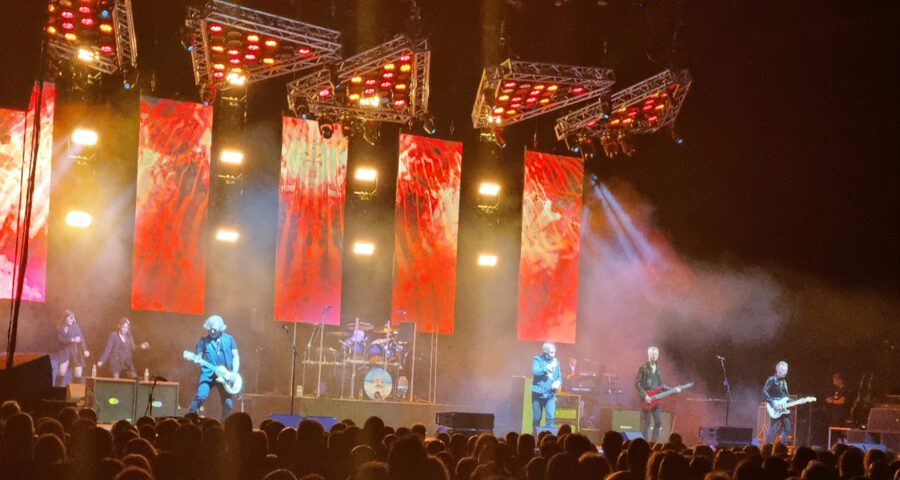 Is having one massive hit single a millstone? I mean, most bands would kill for one, but Ugly Kid Joe have got one. Whitfield Crane knows it too. “I command you to stand, right now” he says, before that riff to “Everything About You” kicks in. As good now as it was in 1991, when I – and perhaps many of the crowd – bought “As Ugly As They Wanna Be” the EP it came off, it is the last song here, like it was always going to be. Yet, for all of that, UKJ have always had plenty of excellent songs. “Neighbor” being one of them as it kicks off the set. It often gets forgotten, though that they’ve released some really good stuff in their later period. “No One Survives” underlines that neatly. Whitfield Crane knows how to work a crowd too, and he’s very, very good at it. He’s basically got thousands of people in the arena wrapped around his finger within about 15 minutes into the set, and “Cats In The Cradle” does its singalong thing, but “Milkman’s Son” is even better. There’s a couple of negatives too, not least they mess with a guitar battle that doesn’t really fit in a 45 minute support show, which is a shame because when they do the hits (as opposed to just the hit) Ugly Kid Joe are a match for anyone.

On the 24th June 1995 I watched Thunder (and Ugly Kid Joe as it happens) at Wembley Stadium. They were opening for Bon Jovi (Van Halen were on the bill too) and they did “Dirty Love” in that slot.

On the 27th May 2022, at Resorts World Arena, Thunder are in the midst of their biggest ever tour, and they are doing “Dirty Love” as their last song. A thought strikes me: they must have played that song thousands of times, and yet Danny Bowes (still one of the best frontmen with that velvet voice) does it like the first time in his life (and probably exactly the same as 27 years before).

That’s the magic of Thunder and that is why, as a fan of long standing, its so great to see them finally playing on these stages as headliners rather than in front of some supposed “bigger” band’s gear.

What makes these shows (and they’ve been rescheduled twice, so who knows what was originally planned?) even more interesting is that they’ve just released perhaps their most ambitious record ever in “Dopamine”, and a lot of it is from that collection.

Not, though, before they start the set with the brilliant “Last One Out Turn Off The Lights”, one of the standout cuts on 2021’s “All The Right Noises”. A plaintive discussion on the political and moral compass of this country, but because its Thunder and wrapped up in a catchy, “cheeky chappy” persona no one notices, really until it sneaks up on them. That’s what they’ve always done, and “Dopamine” is full of it. A wonderful record, “The Western Sky” is as good as it gets.

Even though – with the two new albums to be mined – more than half this almost two hours is new stuff, there is still a brilliant back catalogue to pick from. “Higher Ground” with its “I don’t wanna spend my whole life in this town hook” is as good now as it was 30 odd years back.

There’s the pandemic anthem “One Day We’ll Be Free Again” is poignant, given around 5000 people are sharing it’s experience, but “Resurrection Day” is perhaps even more sentimental, as Bowes dedicates it guitarist Ben Matthews who has beaten cancer twice.

If ever you wanted to experience the extremes of Thunder, if you like, then “The Devil Made Me Do it” about the joys of ….urmmmm…..enjoying yourself and “Low Life In High Places” is full of anger and desolation. 30 years old and it’s still as prescient, which is both truly dreadful but a mark of great songwriting.

That’s what the band – augmented here by backing singers Julie Maguire and Carly Green and keyboard player Sam Tanner – do and they are so comfortable in their skin these days too. “Young Man” takes the modern world to task, while “Love Walked in” and “Backstreet Symphony”, the two classics are either side of a wonderful new one, “Across The Nation.”

The encore carries on the new-meets-old thing. “Last Orders” sees Luke Morley, the man who wrote nearly all of these, and is such a wonderful guitarist, singing for a bit, and “Dancing In The Sunshine” is perhaps the perfect good time Thunder tune. It’s the one before where we came in, if you will, and you’re soon singing “Dirty Love” and clapping your hands with the best of them.

Thunder used to have a T-shirt which proclaimed them to be a “British Institution” and they might well be, but these days they are bigger than ever – and as a fan of over 30 years – you can’t help but feel pleased for them. More importantly than that, though surely, is that they are as good, if not better, than ever too. It is impossible not to come out of one of their gigs with a smile on your face. I’ve watched them countless times and they’ve never failed.