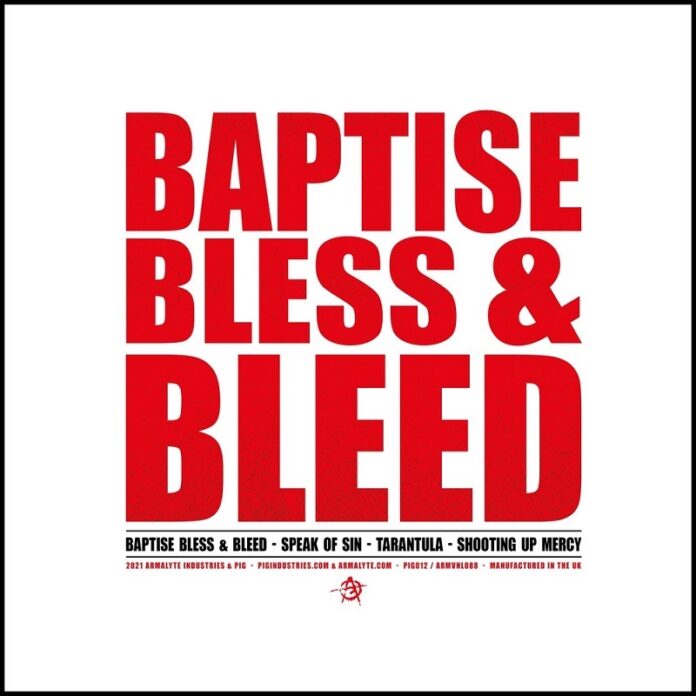 Raymond Watts is an English musician, the founding and sole member of the post-industrial music project PIG, sometimes written as <PIG>. Watts was an early member and periodic collaborator of KMFDM and has been a visible part of the industrial music scene since the early 1980s. He has also scored music for Alexander McQueen shows, as well as installations and exhibitions. His new EP `Baptise Bless & Bleed` is released this month.

This extended play opens with title track `Baptise Bless & Bleed` which may well be a reflection or rumination on forms of organised religion and preachers of this type of rhetoric. It has a fairly slow burn heavy industrial texture and reminded me of Nine Inch Nails `Terrible Lie` with Sisters Of Mercy`s Patricia Morrison adding backing vocals. We have a much faster paced offering with `Speak Of Sin` which retains the intensity of the previous number and seems to be a plea from the narrator to somebody who seems to have similar longings and desires to get together .

`Tarantula` is a mid-paced quite intense offering that enjoys a deep synth undertone with all sorts of electronic tones joining as it evolved. The lyrics seemed to encompass a sense of injustice or frustration felt, justly or unjustly by the chronicler. This extended play closes out with `Shooting Up Mercy` which I read was an epic paean to the cosmic joke that is human existence. It`s quite mesmeric and had some superb backing vocals along route that almost had a gospel like flavour. There`s electronic pulses, deep but gently shared vocals and a blistering guitar solo towards the end. A pretty demanding and hectic number to close out on.

There`s a further twenty minutes of pleasure and pain to be found with extended versions of ` Baptise Bless & Bleed`, `Speak Of Sin`  and `Tarantula`

It would be unfair to say that this release offered anything unique, exceptional or that hasn`t been heard before but there was much to enjoy with `Baptise Bless & Bleed` and it reiterated as to why I should listen to much more Industrial rock than I currently do.

This release has proven once again that Raymond Watts and his project PIG lead the way in this genre of music where others can only follow in his wake.