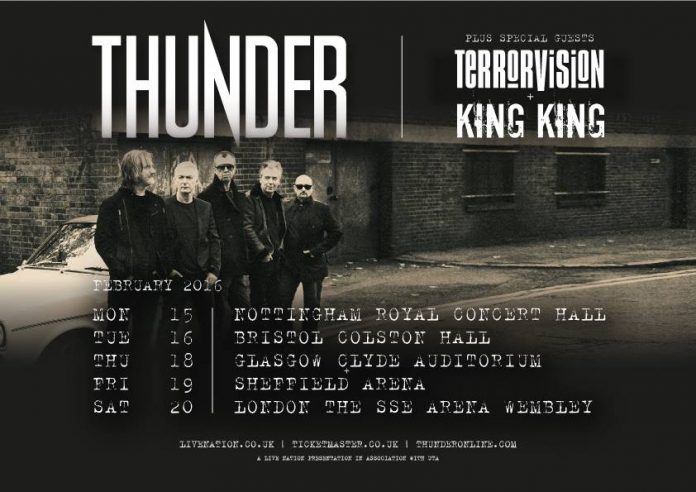 You can forgive King King for looking a little jetlagged. Yesterday they were in India, driving here straight from the airport. It’s been, as frontman Alan Nimmo observes with some degree of understatement: “a long day”. But even their own version of Planes, Trains And Automobiles can’t diminish the blindingly obvious fact that King King are a brilliant band. Sound gremlins dog opener “More Than I Can Take” but that tiny issue isn’t going to spoil this chance. This tour is about taking King King into the mainstream and that’s what these songs deserve. “Rush Hour” (complete with audience singalong) is gorgeous, “Hurricane” grooves along and “Crazy” stomps. That theres other stuff to love about King King than blues is shown by closer “Stranger To Love” which owes more Free than Robert Johnson. Good enough to get 3000 people onside here, no doubt it’ll be the same story with 12,000 at Wembley in a few days.

“D’ya remember us from the last millennium?” Enquires Terrorvision’s resident dervish Tony Wright. “We’ve been around for a thousand years….” As always with our Tone there’s a grain of truth here. They were massive in the mid to late 1990s and this – their first gig for three years – is going down a storm when he says the line.

Yeah, it’s been a long time, but they’ve lost none of the songs – “Discotheque Wreck”, “Celebrity Hit List” and “Josephine” are as good as ever, with most knowing them word for word – and they’ve lost none of the odd banter (“I know you are sitting down, its like the biggest palates class in the world” offers Wright at one point) and very few can work a crowd like this. With three original members still left – Mark Yates and Leigh Marklew join the effervescent singer – this is a band that has a back catalogue to kill for.

And that’s the thing. Strip away the northern laddish charm and there was some extremely skilled pop rock songs here. That was the reason they provided – along with The Almighty, The Little Angels, The Wildhearts and yes, Thunder – the soundtrack to their twenties for much of the audience (MV included).

As it hurtles -and “D’ya Wanna Go Faster?” appears to be an order not a song – towards the finish that point is rather neatly reinforced. “Oblivion” is a doo-wopping fest and “Alice, What’s The Matter?” is bouncier than a three year old having a wine gums binge on a trampoline. Then there’s the Whales And Dolphins of “Perseverance” to end things. Even better they don’t play “Tequila”, the number one hit that wasn’t actually very good, and stick to the ones we all really liked. Where this reunion goes who knows – but even if it’s only for these shows, then, damn, it was good to have ’em back. Terrorvision then: Still shit ‘ot.

A few years back Thunder played one of their special Christmas shows across the road at Rock City. The event t-shirt proclaimed that the band were “a British institution” and, more than with most, that seems to ring true with the five piece. Since 1989 they’ve been the band the public liked more than the critics, but moreover the one that the public wouldn’t let die. Time and time again they’ve tried to split, but time and time again the rock lovers of Great Britain have demanded that doesn’t happen and they’ve got back together for one more show.

The reason as to why – perhaps – is included in a verse in the title track of their 2015 comeback record “Wonder Days,” which gatecrashed the top ten. The song, the one they choose to begin tonight with, contains these lines: “Just like any misfit I started up a band/I didn’t have a clue And I didn’t understand/Why all of a sudden there were girls around/when truth be told we could barely make a sound.”

That’s the point. Thunder have never been cool in any sense, yet here they are as bonafide arena rockers, with thousands doing exactly what front man Danny Bowes (still for MV’s money the best singer in rock n roll) tells them to, and in case of one woman at the front, taking her bra off and throwing it at him.

Very much a “Wonder Days” tour, there’s a decent smattering of new stuff, “Black Water” is dark, while “Resurrection Day” is the hopeful opposite, and Ben Matthews, now thankfully recovered from cancer, is clearly enjoying playing its lead, while “Thing I Want” is what we might term the closest to the “classic” Thunder sound.

There’s enough old stuff to keep people dancing in the aisles though, and there are few bands who can match “Backstreet Symphony” and “Empty City”. The band have dusted off “Like A Satellite” for this tour with the twin solo between Matthews and Luke Morley absolutely sublime.

Few – if any – bands have deftly mixed the nudge-nudge-wink-wink double entendre with genuine tenderness as well as these boys either, with filthy “Devil Made Me Do It” and the still superb “Love Walked In” prove that point and cowbells have surely never been used as well in rock n roll as in set closer “I Love You More Than Rock N Roll”.

The encore takes things up a notch even still. The downright sleazy “Serpentine” is followed by their anthem, “Dirty Love” and Bowes is in full on Ringmaster mode. Insisting that the three tiers in the venue, scream, jiggle or wave depending on his instruction (MV is in the jiggling section) that thousands do precisely what they are urged means either that the gig has been phenomenal, or Bowes is rock’s version of the Pied Piper. We’ll go with the former.