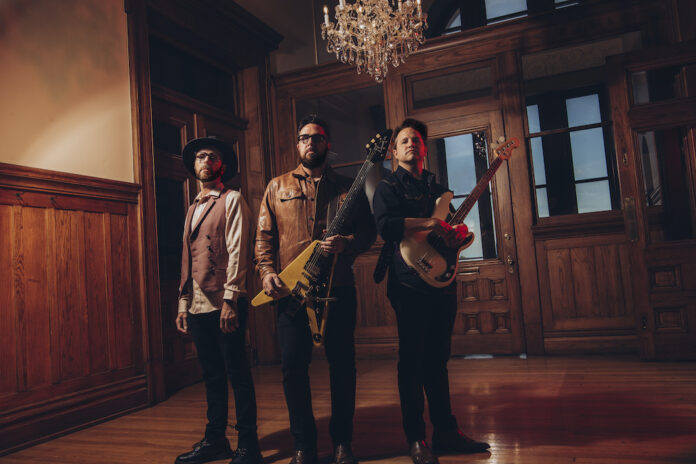 On their cinematic new single “Throw That Stone,” featuring guest vocals by bluegrass singer Brenna Macmillan and mandolin by the acclaimed multi-instrumentalist Warren Hood, the Indiana blues-rock outfit The Cold Stares channel some of the greatest artists in gospel blues and American roots for a stirring tale of judgement and acceptance. Released alongside a lyric video that retells biblical stories in an old west setting, drawing on visual influences that include the video game Red Dead Redemption and the western films singer/guitarist Chris Tapp grew up watching with his grandfather, “Throw That Stone” will be featured on the band’s explosive new full-length album ‘Voices,’ out 10 March via Mascot Records.

“I was drawing from my heroes like Son House, Blind Willie Johnson and even Johnny Cash,” explains Tapp. “To me, ‘Throw That Stone’ speaks to the redemption that can be found by not judging others. I felt that was what Cash did with the prison stuff, and Son and Willie did that with blending the gospel into everyday life.”

Self-produced by the band and recorded almost entirely over the course of just two days with engineer Mark Needham (Taj Mahal, The Killers, Imagine Dragons, Walk the Moon, Fleetwood Mac), The Cold Stares’ new album stands as the band’s most mature, eclectic collection yet, balancing gritty muscle and tender emotion in equal measure. The release of “Throw That Stone” follows previous single “The Joy,” which draws from Pink Floyd as it revels in the happiness that comes with finding your true soulmate. “This song takes a step outside of our normal catalog and tackles the topic of finding happiness after heartache,” Tapp explains.

That sense of total artistic liberation lies at the heart of Voices, which pushes The Cold Stares’ signature mix of blues, southern, and hard rock to bold new heights. It would have been easy for Tapp and drummer Brian Mullins to simply crank the volume here, but instead they make the most of bassist Bryce Klueh’s arrival by getting more nuanced and adventurous in their approach, chasing a raw, unvarnished sound that manages to feel both vintage and modern all at once. Add it all up and you’ve got a gutsy, cinematic record that’s as honest as it is exhilarating, a high-octane dose of unadulterated rock and roll that tips its cap to everything from Cream to Led Zeppelin as it reckons with love and loss, sin and redemption, hope and regret.

“A lot of these tunes deal with really personal things that have been on my mind for a while,” says Tapp. “I just had to live enough life and get enough experience under my belt to know how to talk about them, to know how to feel comfortable opening up those veins and sharing whatever came out.”

Characters fueled by similarly desperate longings—for hope, for purpose, for comfort—turn up throughout the record. The haunting “The Ghost” channels the redemptive fervor of a Sunday morning tent revival, while the epic anthem “Nothing But The Blues” wrestles with hard times in a down-and-out town.

After wrapping up touring for 2021’s ‘Heavy Shoes’ (their fifth studio album and debut release for Mascot Records), Tapp and Mullins returned to their adopted hometown of Evansville, Indiana, with a decision to make. The band’s sound had been growing increasingly elaborate in the studio, but unless they wanted to start playing along to pre-recorded backing tracks onstage, they were reaching a point where they wouldn’t be able to faithfully replicate their tunes anymore as a duo.

“We’d been a two-piece for a decade, so it wasn’t something we took lightly,” says Tapp. “But we’d also known Bryce for a long time and knew he’d fit right in.”

Previous article
CATCH A MARVEL
Next article
HOT FOR PREACHER