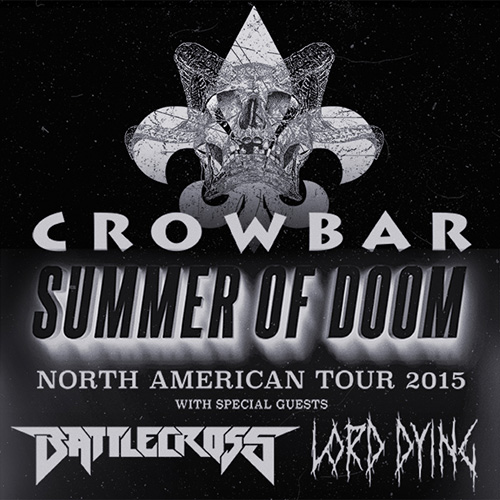 Motor City thrashers Battlecross have announced that they will join Crowbar and Lord Dying on The Summer of Doom Tour, with the devastation beginning May 28th and ending July 3rd in Crowbar’s home state of Louisiana.

“I am beyond excited to tour with one of my favorite bands, Crowbar. Ever since I heard Odd Fellows Rest, I’ve been a fan. Kirk Windstein is such a monster guitar player. His riffs are inspiring. It’s an honor to be able to hit the road with these guys and I’m thankful and excited for the opportunity. We’re excited to get back out there, especially Western Canada (it’s been too long!) See you all soon!” says Battlecross Guitarist, Hiran Deraniyagala.

The Summer of Doom is the first tour for Battlecross since finishing the production of their third Metal Blade release, produced by Mark Lewis and engineered by Jason Suecof at Audiohammer Studios. The tour also puts an end to the band’s search for a permanent drummer, announcing that the bay area’s Alex Bent will sit behind the kit. After performing with the band on two 2014 headliners and in South America, Alex joined the band in the studio for the next album. He can be seen here performing ‘Ghost Alive’ last winter on the Winter Warriors Tour.

Battlecross‘ most recent album, “War of Will,” debuted at #134 on the Billboard Top 200 chart upon its release in July of 2013. This was the band’s first ever Billboard chart debut! “War of Will” also peaked at #3 on the US iTunes metal chart on the day of release. Watch the music video for “Never Coming Back” now at metalblade.com/battlecross.