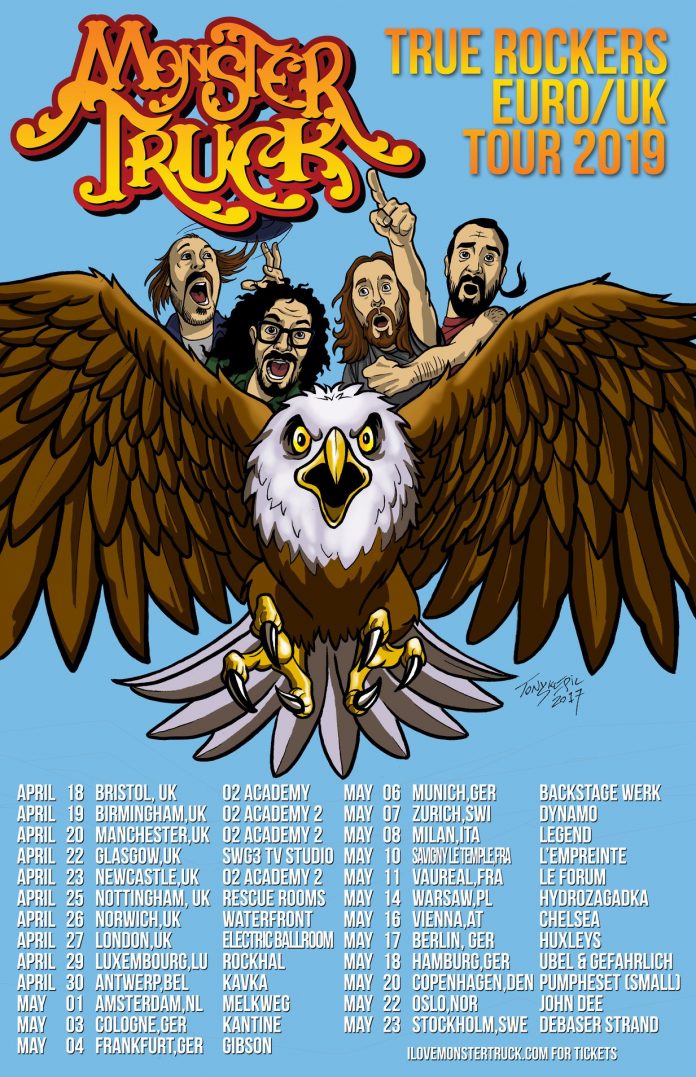 As they come into the final week of their triumphant November-December European tour with Black Stone Cherry and The Cadillac Three, Monster Truck have announced they will be returning in April-May 2019for a 25 date headline European tour. They will be calling through the UK, Luxembourg, Belgium, The Netherlands, Germany, Switzerland, Italy, France, Poland, Austria, Denmark, Norway and Sweden.

The Canadian juggernaut will be playing songs form their new album ‘True Rockers’, which was released on Mascot Records in September, as well as some of their classics. By the time the tour comes around it would have been 2 years since their last headline run outside the US and Canada and talking about returning for the tour singer/bassist Jon Harvey says, “I f***ing love Europe and the UK! I’m so excited to come back and play a proper headline set to our supporters! We have an incredible night of rock n roll planned. It will be a night no one will ever forget.”

Guitarist Jeremy Widerman also says, “One of our favourite things to do is touring Europe/UK and when we get a chance to headline it’s even better.  Expect a long raucous set filled with songs from every album.”

‘True Rockers’ was written during the time on the road whilst they were touring with the likes of Deep Purple, Billy Talent, Nickelback, Jane’s Addiction and more through 2016 and was produced by Dan Weller (SiKth, Young Guns, Enter Shikari) at Echo Mountain Studios in Asheville, North Carolina in July 2017.

True Rockers’ is the sound of a band letting lose and having fun. Frontman/Bassist Jon ‘Marv’ Harvey affirms, “We want people to listen to it and have fun, have as much fun as possible.” “Yeah, that’s what I was gonna say too,” adds Widerman. “I mean right off the beginning of the album you hear me scream at Marv. That just kicks off the entire vibe of the album. Us in a room, having fun, joking and yelling at each other.”