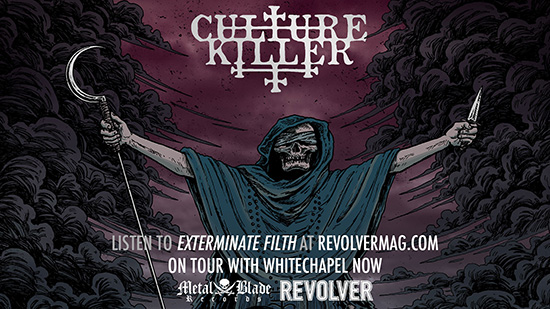 Hardcore crew ready another a track

Set to release their debut full-length, Throes of Mankind, on November 27th, Florida’s CULTURE KILLER is giving fans another preview of their upcoming album today. To hear the new track, “Exterminate Filth“, from the metallic-hardcore outfit, head over to RevolverMagazine.com now:revolvermag.com

To stream the album’s first single, “Path of Reflection“, and to pre-order Throes of Mankind, head over to: metalblade.com/culturekiller

Currently on the road with Whitechapel and Psycroptic, Culture Killer eagerly wrote and recorded Throes of Mankind earlier this year, with the intent of educating the masses about the world’s injustices. Through 10 tracks of pummeling metallic hardcore, the disgruntled quintet successfully delivers their message with violent, malevolent fervor. According to Culture Killer, this is their sole purpose: “Using the band to do anything other than talk about the evils and tragedies in the world would be doing an injustice to the listener and to ourselves…The album hits on specific topics that the world is currently, and has been battling. Such as: racism, human trafficking, pedophilia in the pulpit, addiction, and the digital age ruining real human communication.”