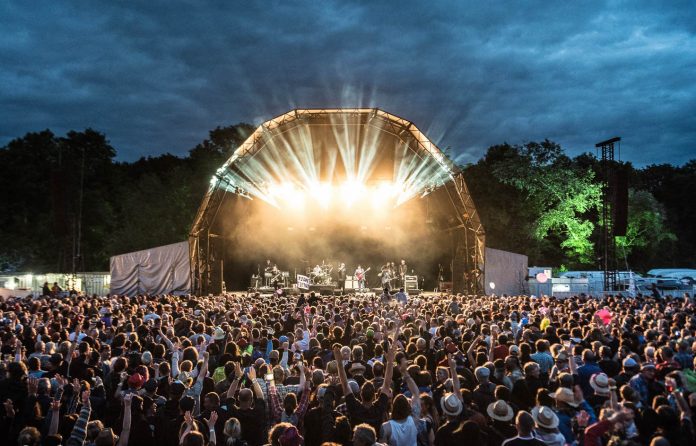 Indie legends SUEDE headline the Pallet stage on Friday night. Saturday is topped by legendary British rock band THE CULT, and Sunday is closed by founding member of the E Street Band Stevie Ray Zandts LITTLE STEVEN & DISCIPLES OF SOUL.
They are joined on the Pallet stage by a first class rosta of acts, including newly reformed 90s indie icons DOVES, Birminghams EDITORS, OH SEES, THE WILDHEARTS,STEEL PULSE, REEF, HOLLIE COOK, MAD DOG MCREA, and many more!
The Woodland is headlined on Friday night by punk legends STIFF LITTLE FINGERS, on Saturday by Scottish indie-rockers IDLEWILD, and Jamaica’s premier ska band THE SKATALITES will close proceedings on Sunday night.
Other notable acts appearing on the Woodlands stunning hand-carved stage include punk rockers PULLED APART BY HORSES, indie folk trio WILDWOOD KIN, Mercury Music Prize nominee and all round folk superstar SETH LAKEMAN, New Model Armys JUSTIN SULLIVAN, folk-poetry troubadour BEANS ON TOAST and a host of other fabulous acts over four days.
The Maui Waui, Rogues Hideout, One Big Showcase and Something Else Tea Tent line-ups will be released early in the New Year, as will the acts appearing on our brand new area Pen and Parchment which will showcase comedy, spoken word, band interviews, magicians and charity talks from the festivals chosen 2019 charities.
Once complete, the festival line up will boast more than 200 acts across 9 stages over 4 days.
BEARDED THEORY
Held in the stunning surroundings of Catton Hall on the Bearded Theorys Spring Gathering will return in 2019 for its 12th successive year, once again taking place over the late May Bank Holiday weekend.
Having started life as a birthday party in the garden of a Pub in Derbyshire, Bearded Theory has evolved to become one of the UKs best-loved and critically acclaimed festivals, winning major awards including: Best Small Festival, Best Promoter and Best Family Festival at the UK Festival Awards; and Best UK Independent Festival at the AIM Music Awards.
Michael Eccleshall, Bearded Theory spokesperson says,
We cannot wait to get back to Catton Hall in May for our 12th Bearded Theory! The whole team have been working flat out to bring you another incredible line up, and with The Cult, Suede, Disciples of Soul, Doves, Editors, and literally hundreds more acts brilliant acts over 4 days (pus loads more still to announce), we are confident that we have achieved our goal! As promised, we have brought in the UKs very best traffic management company, and introduced a raft of changes to reduce congestion on the roads including: opening festival gates for longer on Thursday, reducing the number of Campervan and Caravan tickets on sale, and clearly marking out all spaces. We want to thank everyone for their continued support of Bearded Theory, and look forward to seeing you in May!
BEARDED THEORY FESTIVAL 2019
TICKET PRICES
Adults (16+): £122.50 | Age 12-16: £55 | Age 6-11: £28
Children aged 5 and under are Free (Ticket Required).
A monthly instalment payment plan is available on Early Bird | Adult and Teen Tickets (whilst stock last)
until December 30th 2018. For more info see www.beardedtheory.co.uk
Cars: £12.50 (advance) | Campervans & Caravans £37.50  limited availability
Booking Fees Apply
All Tickets Include Camping | No Day Tickets
To buy tickets and see full T&Cs : www.beardedtheory.co.uk
Previous article
ARTIST OF THE DAY: VICTOR KRUMMENACHER
Next article
STEELHOUSE GETS SOME MOVEMENT