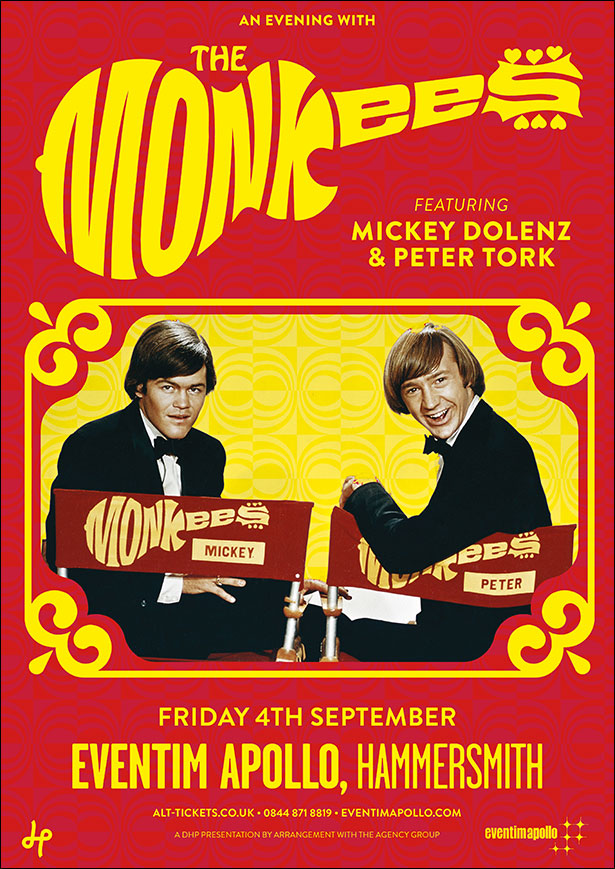 The Monkees featuring Micky Dolenz and Peter Tork, will perform their first concert in the UK since their sold-out concert at the Royal Albert Hall in 2011, at London Hammersmith Eventim Apollo on Friday 4th September 2015.  Tickets are available from the 24 hour box office 0844 871 8819 or0844 249 4300 or www.alt-tickets.co.uk and www.eventimapollo.com.

An Evening With The Monkees presents a full evening of magic, music and multi-media splendour, including rare films and images, plus footage from their iconic TV series.  The multimedia concert features all of the Monkees hits Last Train To Clarkesville and Daydream Believer, plus an intimate acoustic set, and selections from their cult classic, HEAD.

The Monkees’ cult runs deep in the UK, inspiring boy bands everywhere and racking up two more Top 20 albums in 1989 and 1997.  In 1965, when four young men were cast in the TV roles of a struggling rock band inspired by The Beatles’ A Hard Day’s Night, few could have predicted the global impact The Monkees would make on music and pop culture at large – an impact that still reverberates 50 years later.