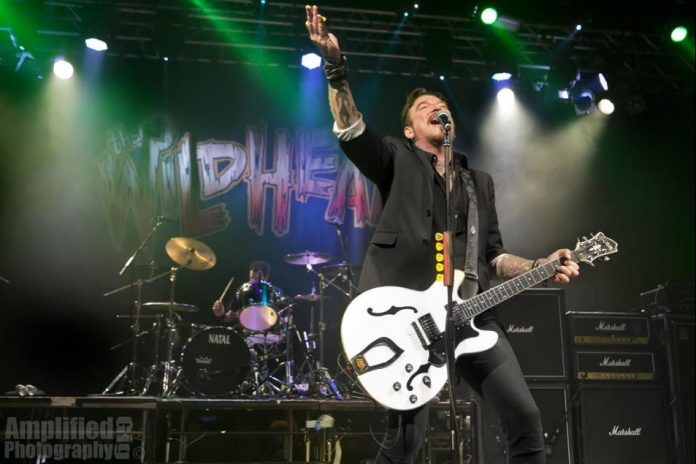 In recent years, this reviewers father has adopted a kind of reflex when it comes to talking about the passage of time. Whenever someone says “blimey its x amount of years since……” He’ll drift off into a reverie and say: “yeah, well Star Wars is nearly 40 years old.”

For MVM tonight isn’t far from being that type of evening. Tonight means it’s 20 years since the two people that now largely make up this site, were stood waiting for Canadian hair metal Herbert’s Sven Gali to arrive onstage for an acoustic gig in Birmingham, when the stereo in the club played a song that we loved so much we went to ask the DJ what it was. (Can you imagine, kids, no Soundhound, no internet. We had to physically interact!) the track was like nothing we’d ever heard before. It began with a woman’s voice telling us we had the best answer machine message she’d ever heard, then a bloke suggested we dragged him round all day like a ball on a chain.

The very next day “Earth vs The Wildhearts” (the album from where that song, which we now know is “My Baby Is A Headfuck,” comes) was purchased and a few weeks later, their second full length record “PHUQ” was too. It reached number six in the album charts and was perhaps the first time where they’d really let their imaginations go. You could argue it was better than the debut (it’s certainly more ambitious) but that’s a debate to have some other time. The fact they are playing it in full to celebrate is the reason we are here, Christ, the fact the Wildhearts play anything is good enough reason to be anywhere, and it’s very nearly 20 years (on Halloween it will be) since MV first saw the band at a sold out Civic Hall, literally just around the corner from here.

Before them, though, it’s a band with only one of them. Ginger has been pretty vocal on the subject (to be fair there’s few subjects he’s not vocal on) that there will never be another Wildhearts album. But one of his current projects is Hey Hello, who open tonight. And actually, given his somewhat patchy output outside of The Wildhearts, Hey Hello are right up there with Silver Ginger Five as the best thing he’s done away from the band that made him (in)famous. Effectively just bouncy, pop tinged rock n roll, they are tonight augmented with Eureka Machines’ Chris Catalyst, while singer Hollis Mahady pulls it all together superbly. Songs like “Feral Days” and “Lock For Rock (And Other Sporting Cliches)” are even better live than on record. He might not be in the studio with tonight’s headline act, but Ginger is back there with HH, and a new track “Don’t Stop Loving The Music” is given a try here. It’s catchy and it’s delivered with passion. A set that ends with “Swimwear” highlights a band that deserves its support slot irrespective of who one of its members is.

Baby Chaos have just resumed after a 17 year hiatus. They have a new record out soon themselves. One of the clutch of songs they play from it is called “You Can’t Shut Us Up,” which seems to be heavier than their previous work perhaps and less concerned with youthful hedonism than they used to be. That said, there’s obviously plenty of dipping into the back catalogue and the likes of “Love Your Self Abuse” and “She’s In Pain” sound just the same as when they were spritely kids. The sort of stuff that used to crossover to NME back in the day, Baby Chaos prove that time need not diminish the riffs.

Which brings us back to The Wildhearts, time can never diminish their powers. Indeed arguments can rage forever about why this band aren’t still the biggest band in the world (the answer would probably be the same, Ginger just wouldn’t fancy it and would do something wilful to mess it up) but there’s something inescapable: between 1993-98 there wasn’t a band on the planet who could compete with The Wildhearts for albums, b-sides, live gigs and just damn excitement.

Right at the apogee of all of this came this album. Guitarist CJ was sacked as it was being recorded – he’s here tonight and brilliant – which gives a flavour of the combustible nature of things back then. “PHUQ” contains some wonderful songs, and they still sound great here. In fact, the biggest compliment you can pay this gig is that if they released the album tomorrow it’d be album of the year in 2015.

The format, of course, is that they play all of it. From “I Wanna Go Where The People Go” to “Getting It” and all of its twists and glorious turns. Whether that’s the single “Just In Lust,” fan favourite “Nita Nitro” or barely played album tracks like “Be My Drug” it all sounds magnificent. Special mention perhaps for “Naivety Play” which remains its most underrated gem.

After this there’s another 45 minutes to kill, and that means they return for a breakneck run through some things you’ve heard a million times (“Caffeine Bomb,” “Everlone,” “Vanilla Radio”) some things they haven’t played for years (“Stormy In The North, Karma In The South”) and some things they don’t always play but are just great “(Shame On Me”).

It ends in time honoured fashion with “29x The Pain” and it’s a measure of this band that the track is one of their best loved but doesn’t appear on an album. Quite simply, there’s never been another band quite like them, there probably never will be, and even if there is no more albums, this version of The Wildhearts – Andy Parsons lookalike Jon Poole is an able deputy for Danny McCormack – are more professional than they used to be.

In the old days you were never quite sure if a Wildhearts gig was going to be a triumph or torture – sometimes they were both – these days you know: they’ll just be one of the best bands ever, playing some of the best songs ever written. And it’s PHUQ-ing great.