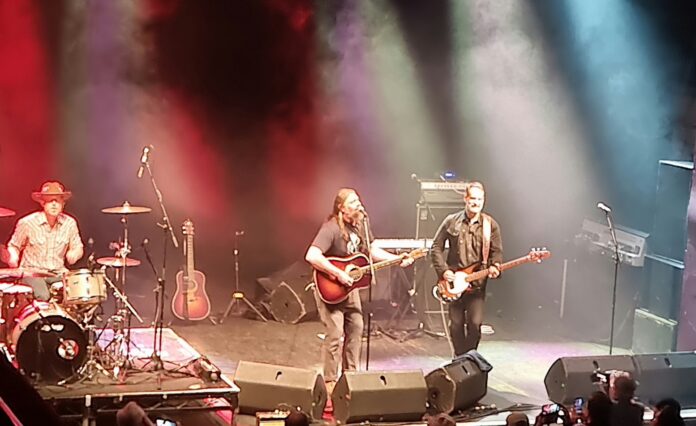 L.A Edwards play a song called “Leaving Los Angeles” second tune in their set. It must be metaphorical. The sound the four piece make is so sun kissed, their sky so cloudless that they must belong in those West Coast climes. One of those bands (a little like MV faves The Cordovas) that could only be American and one of those bands too, that almost deceives. From out of nowhere in “Louisiana”, for example, comes a lead guitar line you weren’t expecting, while “Nothing Like You” (“for all you true lovers out there” says Luke Edwards) eschews the sentimental and pulses along like the timeless rock n roll it is. Originally a solo vehicle for Edwards, now LAE has a real band feel, with drummer and brother Jerry and the others having a real chemistry. “Whispering Wind” a harmonica drenched ode to their hometown, but it underlines the fact that you can cherry pick whatever influences you like from rock history and LA Edwards sound like them all, but none of them at the same time. “Trouble” is a real stand out moment, but the harmony involved in the cover of Townes Van Zandt’s “If I Needed You” returns them to their folk roots. When that is over, there’s a simple wave and a “peace and love” message. It was never going to end any other way. L.A Edwards simply put, make a statement here. It’s their first visit to the UK. Get on board before everyone else does.

About halfway through their set – and it’s a band these days – The White Buffalo play “Stunt Driver”. Matt “The Machine” Lynott thunders his kit. In fact, “thunders” doesn’t do it justice. He absolutely beats the thing to within an inch of its life. On the other side of the stage is Christopher Hoffee, the bass player, keyboard player and no doubt anything else you asked him too. He’s as big a livewire as there is, and he attacks his bass as if he’s channelling Steve Harris from Iron Maiden. In the middle of it all is Jake Smith. He is The White Buffalo. He barely stops smiling.  In short, who knows what sort of band this is? It damn sure isn’t an Americana one like its meant to be, that’s for certain.

They’ve been waiting for about two years to play this gig. It’s been rescheduled three times, and although it’s a cliché to say, they are seemingly never happier than when they’re on the stage.

The thing is that what TWB do is at odds with the lyrics. Smith is one of the great lyricists there is. The hour and a half they play is packed full of brilliant songs. It’s just that there is a raw, almost punk, kind of quasi-metal thing going on.

Seven albums into his career he’s got a canon of material to play. “Problem Solution” kicks things off. It comes from the latest album “Widows Walk”. The pandemic meant that they never toured it at the time, so its something of a treat to hear its songs now. There’s plenty of them. “The Drifter” is a highlight, the title track is oddly discordant and it comes alive here.  A lugubrious “Cursive”, where Hoffee switches to keys, and the gentle “Sycamore” and “No History” completes a clutch of the wonderful new stuff.

And every so often they get hardcore. They switch gear at a moments notice. “Don’t You Want It?”, an unhinged “Oh Darling What Have I Done” and the way Machine plays drums on “Love Song #1” is a sight to be seen. They almost just unleash him and let him go.

Of course, there’s the big hit to get in, “Come Join The Murder” has a different arrangement to normal, but there’s no disguising the quality of the thing. It’s testament to how good the songs are, in fact, that its not left until the end.

Indeed, the last three in the set are a microcosm of what’s gone on throughout. “The Whistler” is a miniseries in song form, “I Got You” is as fragile as it gets, and “The Pilot” is very close to punk. It gives a crushing crescendo.

For the start of the encore sees Smith emerge solo and its tempting to think of what might have been in another life – and it would have been brilliant too, if he’s been an troubadour, solo and vulnerable, not a rocker with a gang. The band join mid-way through “Damned” but the night ends finally with “How The West Was Won” and the three men are loving it as much as anyone else on the stage and there’s such energy. It’s stunning.  Machine and Smith leave, but Hoffee remains, and its almost as if he needs to be dragged off stage, as if he’s milking every second of being back.

That seems to have been the thread with The White Buffalo all night. They are brilliant on record, but live is where they belong.

Previous article
GET MAD
Next article
BAND OF THE DAY: WORDS THAT BURN