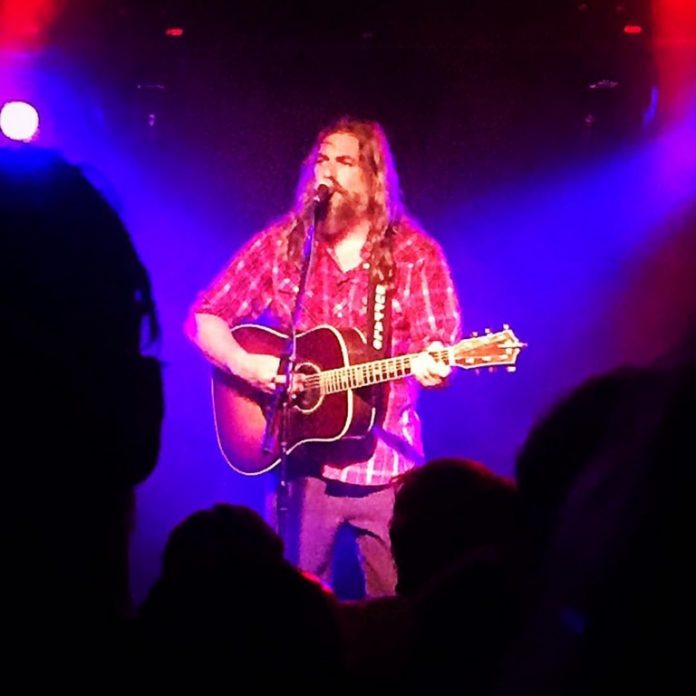 Sometimes, just sometimes, you watch a band and know that it’ll be the last time you ever see them in a place this small.

Case in point, Jake Smith. The White Buffalo, to give him his stage name, might just feel like Americana’s longest serving overnight sensation. Whatever, the packed Institute2 knows every word of every song, and such is the rapturous response for 90 glorious minutes, he’s on the cusp of the “next level”.

And just think, even when he is in the mainstream, these self proclaimed songs of “love, murder, booze and violence” will still make perfect sense.

That though, is rather the point. These songs inhabit a dark, bleak world. A world of drug deals gone wrong – the brilliant “Chico”. A world of death – a stunning “The Whistler” – and a world where the characters in songs such as “Wish It Was True” live in regret and inside their own heads, with their demons for company.

“…..True”, which comes at the start of the encore, is the only one of the over 20 that are aired that Smith delivers solo. The rest of the time TWB is most definitely a band. Christopher Hoffee is the grinning, leaping, bass playing counterfoil to the singer, with Matt Lynott kicking shit out of his drumkit as if it owes him money. Between them, the trio manage to make Americana sound primal.

The skill in all this, however is that no one writes songs like this. Pitched somewhere in some mythical hinterland between Springsteen, Steve Earle, Johnny Cash and Nick Cave, but with the fragile tenderness of Elliott Smith never far away, they find things to say that no one else thinks – except perhaps in the depths of darkness at 3am.

So it is that “Every Night, Every Day” is essentially a hoedown, but it’s followed by “I Got You” which is so cracked and so fragile that it could break at any second. Then there’s the simple, timeless brilliance of “Go The Distance” and granted the words: “you’re not just my woman/you’re a piece of ass” are probably not going to make it to the latest Hallmark Valentines Day card, but they are real and the whole thing drips with emotion. That side of The White Buffalo is to the fore tonight, “Into The Sun” is introduced with the suggestion that “I’m gonna do some sensitive shit for y’all”, while “Home Is In Your Arms” has a stadium bothering quality that only a few could match.

“Come Join The Murder” from “Sons Of Anarchy” is delivered halfway through the set, with an almost casual insouciance that suggests it’s not a big deal. It is. With another artist it might be saved for the last song, but not here. That belongs to “How The West Was Won” and even though he breaks a guitar string halfway through, there’s no sense of it affecting Smith. Put simply, tonight he’s unstoppable.

The band, smiling and bouncing off each other throughout, give the appearance that that they enjoy every second, but also seem to know what is blindingly obvious to everyone here. This is their time. Genuine stardom surely awaits.