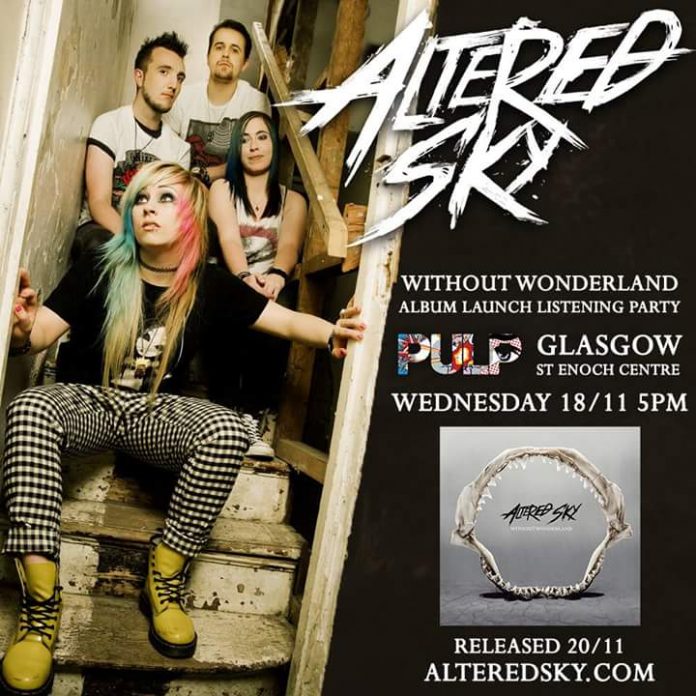 With less than a week to go before the release of their eagerly awaited début album ‘Without Wonderland’, Glasgow based pop rockers Altered Sky are delighted to announce they will be making their second Live TV appearance on STV Glasgow’s The Riverside Show. Altered Sky will be performing 3 songs from their debut album, as well as being interviewed in this Altered Sky grass roots special episode of the show, airing tomorrow (Tuesday 17th of November) at 7pm.

Anyone who misses the show live or who doesn’t receive STV Glasgow fear not! You will be able to check out Altered Sky’s appearance via the STV Player, on the following link – http://player.stv.tv/summary/riverside-show/.

Following the success of their London album launch show, Altered Sky have announced a home city listening party for Wednesday of this week. Kicking off at 5pm on the 18th of November at PULP in the St Enoch Centre, Glasgow, fans will be able to meet the band hear songs from ‘Without Wonderland’ before it is released on Friday the 20th of November.

Altered Sky are preparing to head out on tour across the UK this November. The ‘Without Wonderland Tour’ is the bands biggest ever UK tour. Catch Altered Sky at the following shows:

Tickets for the shows can be acquired from the bands official web store store.alteredsky.com or from the venues directly.