COMMON WEALTH is a 5-piece, Hard Rock & Metal band from “a small town in New Jersey”. In April of 2015 The”WEALTH” dropped their debut single & music vid. “Cut This Deep”, since its been getting tons of play online and around the globe! Christian “C.J” Carson  from the band told us: “It was released through our distributor cdbaby, which then went live on Amazon, xbox music, Spotify, google play, iTunes, and pretty much every other online digital streaming service.” 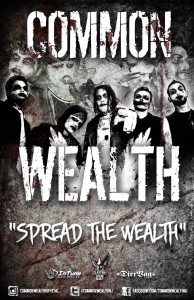 The debut has been gaining a great response and certainty setting the pace for what is to come next for C.W, with “C.J explaining:” By the end of this month, we are getting ready to release the follow up, a new song called “Mend The Pieces” accompanied by a music video as well. With this upcoming release we wanted to give fans even more and show them even more of what C.W. has to offer sonically and visually!”

“On this video we worked with friend and awesome, same videographer/director of our previous vid “cut this deep,” Director Austin Hein of austin hein productions. The video was also directed by Christian himself.

Also surrounding the release of “mend the pieces” there well be some really cool giveaways for fans, as Christian says: “We will be giving away a signed Fender “Squire” along with a t-shirt & signed poster to one lucky fan, the way to enter is simple, as soon as the vid. is released, share it to your f.b page along with #spreadthewealth, after, your name is automatically entered to win the C.W. prize package, two to three weeks after the release we pick a random winner!”