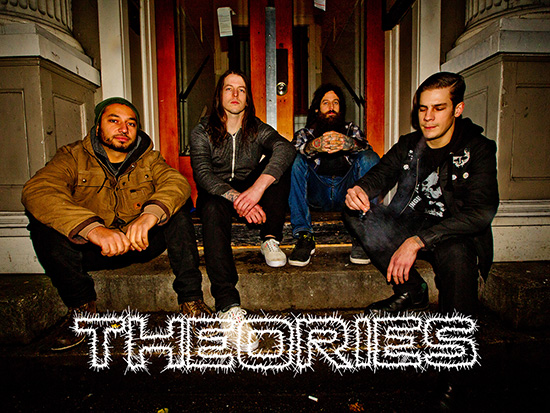 Seattle death grind legion, THEORIES, wrapped up the epically successful Poisoning North America Summer tour featuring headlining labelmates Goatwhore with Black Breath and Ringworm last night in Atlanta, Georgia. The trek pillaged its way through over three dozen venues in twenty-three cities and provinces. THEORIES will grind their way back home on four more dates with Black Breath beginning tonight in Kansas and leveling Colorado, Utah, and Idaho. The band continues to tour in support of the sadistic wares of their Regression full-length, released earlier this spring via Metal Blade Records.

Issued Pittsburgh Music Magazine of the band’s area performance. “THEORIES opened the show …and really got the house ready for blood with their very powerful performance. As their Metal Blade bio states the band put out vibes of, ‘bleak, dark, and generally pissed off grind/metal’ and they do it damn well. Drummer Joe Axler is a driving force that pushes the music as vocalist Rick Powell puts the lyric, well in your face. Guitarist Lee McGlothlen and bassists Kush Karimi are great together as they push the themes behind Regression which explores the downfall of one’s own nation and all that it might encompass.” Of their San Diego takeover, Metal Life notes, “THEORIES started out the night and won over the hearts of the already dozens of bar-goers thrashing around in this bar-turned-sauna. The Seattle-based grinders proved that their often misunderstood sub-genre can be enriched and enhanced with fascinating technical complexities… The band as a whole swept the majority off their feet.” National Rock Review noted of their Chicago show, “Their double bass peddling drums rattle off with as much precision as their chops on the guitars and their time signature changes. One dare not refer to the Seattle death metal group as prog; however it remains evident that this group has done its fair share of homework to deliver the versatile, yet consistent, form of music that they have constructed.” Championed Bucket List Music Reviews of their Montreal performance, “Bleak, super pissed off, ultra-heavy, and insanely fast with the occasional syrupy sludge break, THEORIES was all of this and more. Guitarist Lee McGlothlen’s riff-work was frenetic, and intricate, with a good touch of groove, keeping the songs both interesting, and distinct. Vocalist Rick Powell hit all the right grindcore highs and lows, but thankfully articulated enough to avoid the dreaded death/grind mush-mouth. The band played a number of tracks from Regression, their most recent record, including “Revenge/Rewild,” a maniacal blast of grind that transitioned into ride-cymbal driven groove at the mid point ripped back into blasting fury. The guitar and bass tone on this particular track were so low they are oddly reminiscent of Xibalba.”

Relays drummer Joe Axler of the journey, “After grinding across the states and Canada for the last six plus weeks, sadly the dates of this tour package have to come to an end. Huge thank you to our friends in Goatwhore, Ringworm and Black Breath for being badasses and absolutely killing it every night on this run. Now to begin this string of dates home with Black Breath. Lawrence, Denver, Salt Lake City and Boise, put your grind shoes on and let’s shit!”

SickDrummer recently posted a drum cam video of Axler performing the track “Shame.” Check it out at THIS LOCATION.