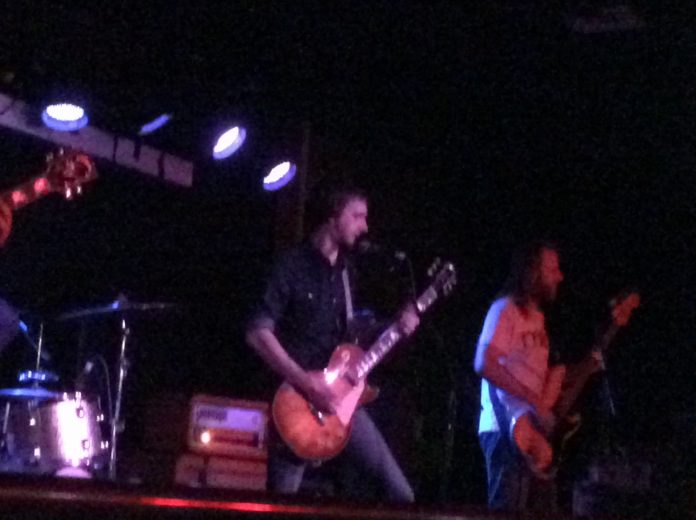 Meet the new The Sword, same as the old The Sword


Due to an error, the official times tonight have managed to add an extraneous “The” to Conjurer’s name. It might be the last time such a mistake is made because they’ll be headline soon. As we’ve said before on this site, Conjurer only made their live debut in early Feb. Their rise since then is pretty spectacular. Sludge? Yep. Doom? Most certainly, but with real heavy intent. All the evidence suggests they are going all the way. Unveiling a song that’s pretty new tonight, “Hollow” takes them into real deep, troubled waters, twin vocalists/guitarists Dan Nightingale and Brady Deeprose sounding truly menacing as they trade off each other. But their air of class is more than that. This is a band that’s developing with each show, bass player Andy Price and Dan seasoned enough now to really let their personalities loose. There’s a quiet confidence here that perhaps wasn’t evident when they took their first baby steps. That was then, this is now and older tracks like “Scorn” and Frail” are sounding ever more monolithic. Conjurer: you’d best remember the name.

All this doom stuff, though, it can get boring. Can’t it? Well, not for our money, but then we aren’t The Sword. The Austin, Texas quartet have been moving slowly away from all that pretty much since the “Warp Riders” record, it’s just that their new “High Country” album has made that break just a little more explicit.

Maybe they are feeling the pressure or maybe “The Heat Is On” – the track they choose to play as they come out – is entirely ironic. That gives way to the downright funky “Unicorn Farm” and this really is a new The Sword. Or is it? Because “Buzzards” which follows, is all 1970s fuzzed up glory. Some of the music that follows is even better, as dry and dusty as the desert and with a groove that swings like a wrecking ball, so any questions about whether these boys still wanted to do this are answered emphatically.

A show that happily melds old and new with something approaching gleeful intensity. The new albums title track and it’s evocative lyrics, is followed by the epic “Cloak Of Feathers” and it’s classic rock twin guitar melody.

Not a band to rely on showy histrionics, or even indeed a particularly gregarious nature, instead the four piece are a hypnotic, almost mesmerising presence who stand and fall on their songs. It’s a battle they win easily. Perhaps best in this regard is the superb “Empty Temples” – with its echoes of Led Zeppelin, this is the new records high point and so it is here – hippy, trippy lyrics abound “your God will always find you,” apparently – but frontman JD Cronise seems comfortable at the helm of this work.

There is a Thin Lizzy-like ear for melody perhaps, and maybe a hint of that bands poetry too, but when The Sword fancy kicking out a riff they can do that with consummate skill, and on occasions – seemingly out of nowhere they can launch into something thunderous, like the bluesy classic in waiting “Mist And Shadow.”

There’s a dip back into 2012’s tour de force “Apocryphon” for “Seven Sisters” which could still flatten buildings if it chose to, and Kyle Shutt is outstanding on lead guitar here, as he is throughout. There’s another of “…..Country’s” high points with “Ghost Eye” and the set ends with the wonderfully apocalyptic “Dying Earth.”

It is The Sword’s one concession to being rock stars that they allow themselves an encore. Albeit one that has a gap drenched in feedback until they do come back for the proto- metal cruncher of an instrumental “Suffer No Fools” (it’s even got a Maiden style gallop!) before the almost Deep Purple like swirl of “Arrows In The Dark” ends a very special show with its mighty outro.

Forget the debates about the new albums direction (and the clutch of its songs played here sound phenomenal live). The Sword are exactly what they always were: brilliant.