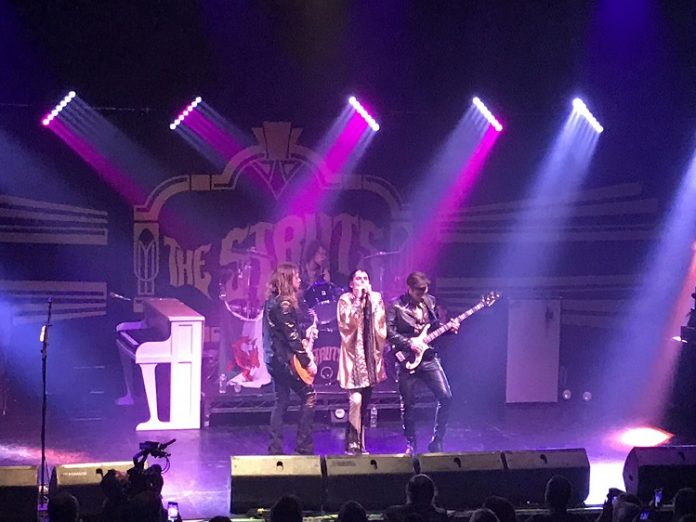 Occasionally you might as well start with the obvious.

So here is the inescapable fact: The Struts are going to be huge.

So, now we’ve got that out of the way, we can get on with the rest of this review.

And the story of how a rock band from Derbyshire gets to be huge is basically contained in the hour and a half that the quartet were on the stage.

See, The Struts think they’re huge already. They’re rock stars. We are told that rock is dead, we are told that no one likes showmanship anymore and everything has to be hip.

No one, thank Christ, told Luke Spiller. The Struts frontman is the sort of fella that goes to Tesco’s in a fur coat and dark glasses, I hope. A man who doesn’t walk, he flounces. He doesn’t dance he – in his own words –  “boogie woogie woogies” and who does all this, initially at least in a pair of multi-coloured spandex trousers. With tassels on. This shit isn’t supposed to happen in 2019, it just isn’t.

But it does. Oh good lord it does.

Right from the off of “Primadonna Like Me”, it is like someone has distilled every rock n roll cliché down to its absolute best bit and injected The Struts with it. “Body Talks” – complete with the finest “whoo whoo” bit you will hear anywhere – and “Kiss This” pass by in a blur and “In Love With The Camera” is just about as good as it gets.

Because for all the antics – and you’d best believe Spiller is like a cross between Freddie Mercury, Steven Tyler and Noel Fielding – the songs The Struts casually toss out of their back pocket are somewhere beyond mighty and close to stadium filling. There’s a reason after all that Guns N Roses, The Stones and The Foo’s are just some of the bands that they’ve opened for.

Interestingly if the first half has been fizzing along like eating Sherbet Dip while firing a glitter cannon, then the second is much more drawn out. Unusually, though it is just as entertaining.

“Mary Go Round” does that thing that many bands do where they light the room with mobile phone torches, but it is “Dancing In The Dark”, oddly, which becomes the centrepiece. Even getting a young lady from the first row to do the Courtney Cox thing.

“Put Your Money On Me” (and to be honest you’d be a fool not to) has a chorus that is enormous and an ego to match, but the band is stunning. Adam Slack and Jed Elliot do a guitar solo of rare skill, and “Where Did She Go” happily splits the crowd in two for a singalong before its done.

Ordinarily, I’d say bands should eschew encores, but The Struts are such rock stars that frankly I’d like them to go off and come back on riding gold unicorns. They don’t, but Spiller is wearing another outfit – about his fifth – as they play “Ashes” before “Could Have Been Me” ends things.

Now I could finish this on a glib note and say it will be them, because it will, and The Struts will take the planet kicking and screaming. Instead though, it’s worth recounting something Spiller said.

“Isn’t time we had fun again?” he asks at one point.

And that, to be serious, is The Struts. They are a technicolour explosion of glorious, unashamed and unabashed rock n roll. They are out there, they are loud and they are very, very proud, and whether you know them yet or not, soon you are going to have no choice on the matter.