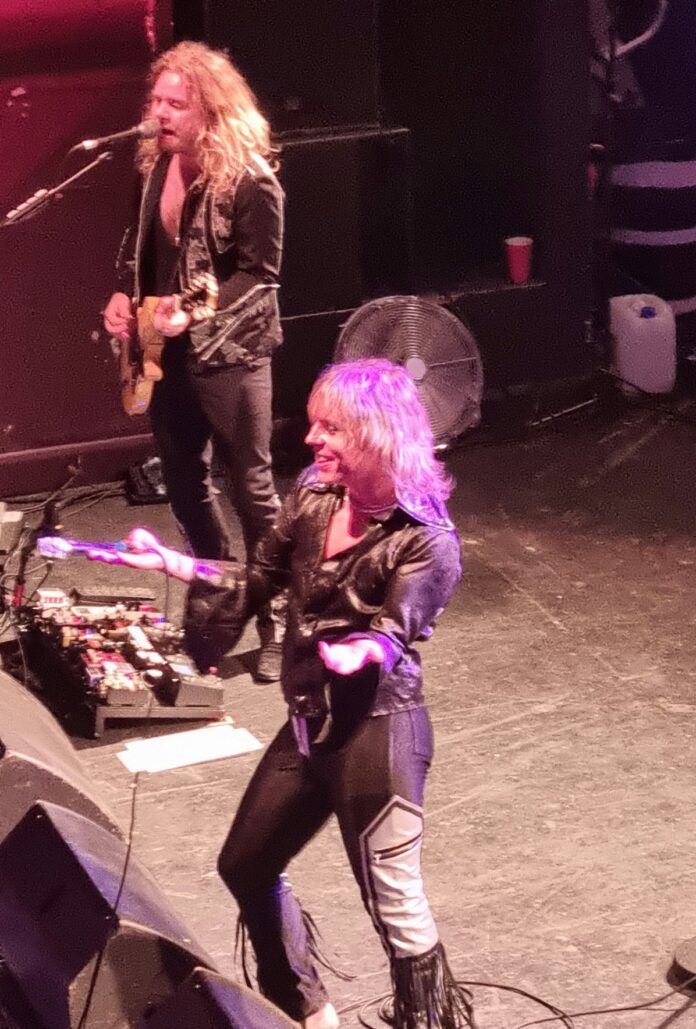 Cardinal Black are part way through their first song – appropriately titled “Rise Up” – when MV realises. The chap on guitar had been familiar. Then the first solo hits. It is him. It can only be Chris Buck. Now maybe everyone else knows this, maybe they’ll pretend. We only deal with facts, so I’d no idea that Cardinal Black were TH3 before. The band Alan Niven (Guns N Roses’ manager) had moved to the Deep South of America to make it big. Not that it matters. What matters is Hollister, Buck and the rest (tonight including Gregg Hollister on keys) remained friends and are still making superb music. Under the CB moniker they have the soul-filled vocals of Tom, who can switch seamlessly from the polish of “Tell Me How It Feels” to the hard rocking “Warm Love”. And they’ve got Buck. Goodness me, 2019’s “best new guitarist in the world” is just that. He is stunning. He’s always been stunning. Gregg Hollister’s keys on “Half Way” steal the show on that one, it almost floats in like a welcome summer breeze. Cardinal Black are a cut above the other band’s with a couple of EP’s out, that is clear. The last one “Tied Up In Blue” merely underlines it. The voice, the playing, the songs, all add up to a package that you’d be foolish to ignore.

“Who’s sweaty? Put your hands up if you’re sweaty”. Luke Spiller has things on his mind as The Struts play their set. To be fair Luke looks fairly moist himself. Well he might be, as he is wearing a leather jumpsuit this evening.

The man who once began an album with one of the cleverest lines in modern rock and roll, “hey, don’t you know who I think I am?” has always believed he was a star. He is a star now. He might very well be the most authentic rock n roll frontman around these days. From the first song (the one where that line comes from) “Primadonna Like Me” (he runs on after the band, naturally) and sings “Don’t you know it’s all about me tonight?” and in a way it is.

Then in others, it isn’t. The Struts have some brilliant songs and are a mighty band. It’s just that they are better delivered live than on record.

The four piece are as good as glam gets. On one hand they belong to another time, on the other “Body Talks”, “Kiss This” and “Hate How Much I Want You” are as modern as you like. That’s the trick they have pulled off.

Look at the crowd tonight. For every person in a Maiden t-shirt, there’s someone else who might be at the only gig they go to this year. The Struts are close to being mainstream, that’s what happens.

Of course Spiller thinks he’s Freddie Mercury. Look at him in “One Night Only” at that white piano and try and shake thoughts of Live Aid from 37 years ago this week. But also look at how he has the crowd wrapped around his little finger in “Dirty Sexy Money” in his own way.

“Mary Go Round” sees the house lights down and the phone torches up as Spiller and guitarist Adam Slack (the pair who formed the band) take it back to the acoustics they probably used to write songs on and after “Put Your Money On Me”, there’s a medley of some early tunes and reworkings of older ones. It’s cleverly done, and this is a band of resolute focus.

There’s a cover of “Wicked Game”, there’s a crowd singalong in “I Do It So Well” and here, Spiller has them working like puppets. Getting 1000 or so people to kneel and jump up in unison just because you tell them to probably isn’t as easy as he makes it look. Do it so well indeed.

These boys were always going to encore. Spiller forgetting the words to “Strange Days” at least proves he’s human and bassist Jed heckling him is fun, but they are right back at it for “It Could Have Been Me”. I am still betting it will be.

Right at the end, before his last jump of the evening and the four take their bows, Spiller says “remember the name…..The Struts”. Try and forget it. You can’t. You won’t want to. I remain as convinced as I have ever been that The Struts are swaggering all the way to the top. Don’t you know, they are who they think they are.