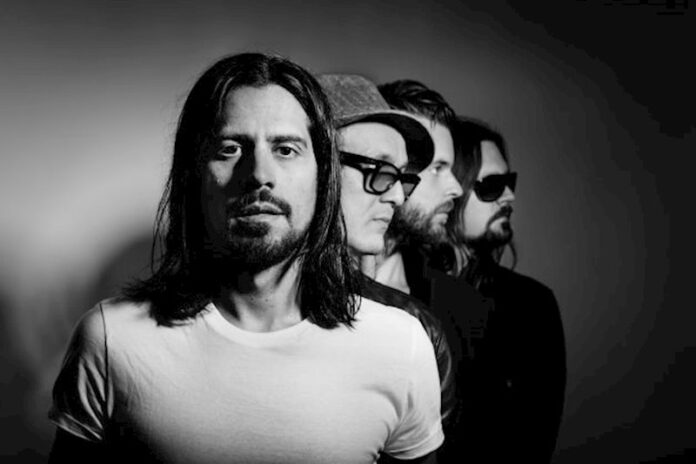 Swedish hard rock act Hong Faux recently signed to Golden Robot Records and today they release their latest single ‘Drop the Reins’ which is available now on all digital platforms.

‘Drop the Reins’ is a heavy riff-based classic Hong Faux track written exclusively as a homage to Miles Davis and rock ‘n’ roll. Can you spot all the Miles references? The band recently released a newly remastered version of their 2013 hit and fan favourite ‘Feign Death to Stay Alive!’

ABOUT HONG FAUX
Ever since Hong Faux’s very first recorded notes that started their journey from blog, to magazines, to radio and MTV, people have tried to label the music and try to figure out the meaning of the band’s name. A London promoter called it “Old school super sludgy riffology with blues wailin’ vox”. Listening to the songs ‘Present Tense-Less’ and ‘Bad City Blues’ on their debut album, it would be foolish to argue against such a statement. On the other hand, you’ll find the sound that brought together four guys with very diverse musical tastes and backgrounds.

One of the things the band members all dig on the same level is the harder bands that came out of Seattle in the early nineties. So, all put together, with a few added ingredients, you get heavy stoner riff galore with strong melodic vocals that honour the harmonic complexity of the grunge era.

“Our ambition is to combine the guitar riffs from the 70’s, the grunge scenes more melodic arts from the 90’s with modern rock. We have always enjoyed pop choruses and were convinced that the harder rock crew would think we were wimpy. But we were wrong… I guess even the cool dudes like to be tickled on the thighs every once and a while.” – lead singer Nik Serén.

The four-piece has done shows all over Europe, sharing stages with such diverse bands as D-A-D, Clutch, Graveyard, Danko Jones, Coheed and Cambria and Babyshambles. 2022 will see the release of new material, developed sound and live shows. You can count on Hong Faux delivering both weight and melody, just like they always do.