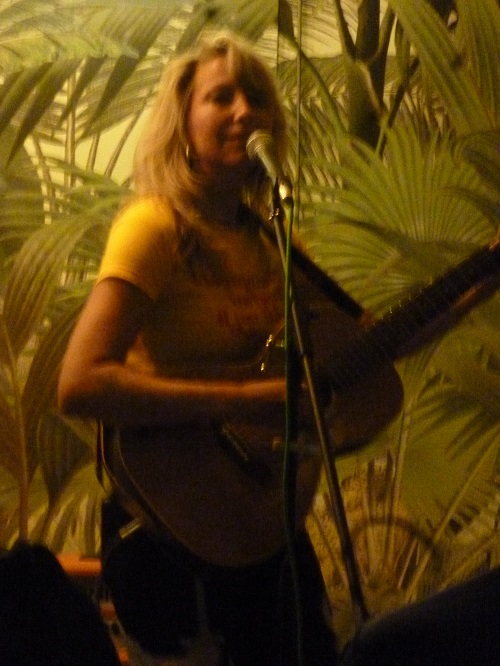 Tonight`s performance didn`t go quite to plan as travel disruptions endured by the artists getting here had played havoc as to who or whom went on in what order. So first up we had Brighton-based singer-songwriter Jack Valero who arrived on stage and shared that he likes to dress up as a spaceman as he is wearing a spacesuit tonight. This will become clearer later in the set. His forty minute performance begins with `You`re No Better Than Me` followed quickly by `Eggshells & Anxious` which seems to be about that uncertainly we all have at times about our future, whereas when we were younger we seemed to have an almost clearer or firmer idea.

Jack plays his debut single `Heaven Help Me` which he shares was his lockdown song but written as the pandemic eased. In the video Jack is dressed as an astronaut and this seems to be where the suit came from. The song itself is wonderfully introspective and thought provoking. The singer talks about living in Brighton and offers up a few folk tinged songs including a couple that I think were called `Blame Is Going To Land` and `So Far Away` but that may only be lines from each number.

The artist has a new single `Hollow Warmth` which I have to say was quite mesmerising although written about a brutal relationship break up. We are encouraged to check out the video which has been posted to accompany this number. We enjoy `Days Gone By` a protest song that he has written before the show is closed with what the singer offers is his happiest song named `This Is A Nightmare`. This was a delightfully captivating introduction to Jack and his music which is at times folk infused but written from an introspective or reflective slant. It would be churlish for me not to mention that Jack is the son of political folk singer-songwriter Billy Bragg but as most people are surprised when they find out, he`s an artist very much in his own right. I have to say on the strength of tonight`s performance, i`m looking forward to hearing Jack`s debut album.

After a short break Georgia born but New York based Kelley Swindall hits the stage and shares an hour of songs that touch on heartache, heartbreak, redemption, and revenge. The edgy `California` opens the set and it`s a very descriptive road song about running drugs across State lines. We have a few numbers about romantic relationships good and bad with the reflective `Dear Savannah`, defiant `Spring Street Drive` and thoughtful `Refuse To Be Blue`.

We have a thumping break up song with `My Minglewood Blues` which opens up after a brief stanza from Hank Williams`s `Your Cheatin` Heart`. `I Ain`t For You, You Ain`t For Me` needs no explanation before Kelley shares a rebound song with the slow and melancholic `He Ain`t You`. We enjoy a slight change of pace with a Murder ballad called `The Murder Song` and the title track of the latest release `You Can Call Me Darlin` If You Want`.

The show closes out with a couple of new songs that haven`t been recorded yet and should be on the next album provisionally titled `Maranasati` which is a Buddhist meditation practice which addresses mindfulness of death and death awareness. The first a Southern Gothic song `The Love You Leave` which was written when the singer was trying to come to terms with her Dad`s passing. It`s an emotional listen and a number that really resonated with me. The final composition `We`re Gonna Die` probably needs no explanation. An enthralling hour well spent.

The night closes out with The Big Apple`s Hennessey or Leah Hennessey who has been named as one of Cultured magazine’s “30 Under 35” young artists. Leah

usually plays with a band who perform more electro type music but tonight she flies solo and shares a number of acoustic tracks that have yet to be recorded. There`s an amusing but absorbing number about Paul McCartney where he has died and has been replaced by a False Paul. We enjoy a couple of numbers that seem to touch on religion and also romantic relationships. Leah shares a story about meeting a Brummie in Bristol, earlier in the day, who loved his home city but found it odd as he was working in a Krispy Kreme outlet in a Bristol car park.

There`s a song that mentions mermaids which is pretty surreal and some further observations about England that she enjoys. One number that has been released and I have to say was spellbinding was `No Transformation` which is available on the HENNESSEY EP.01. which was produced by fellow New Yorker Jesse Malin. Sadly, due to time restraints we only got to hear twenty five minutes from this absorbing artist but i`m just glad she persevered to get here and was able to offer us a flavour of what she has to offer musically.

Three slightly different artists on a balmy Summer evening at a delightfully intimate venue, what more could you ask for?