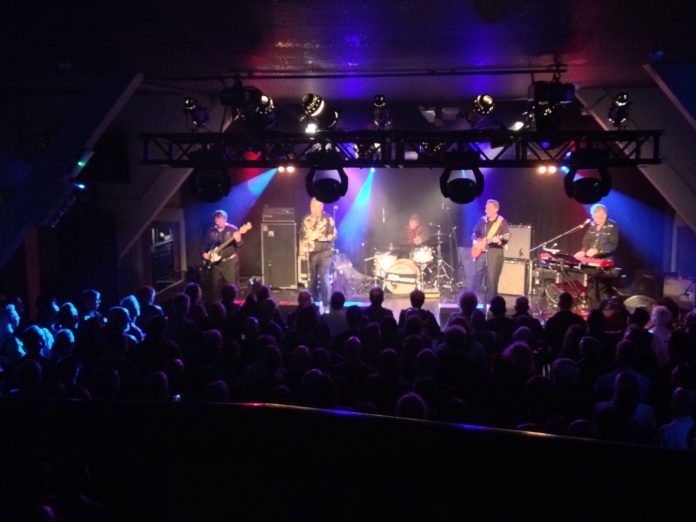 Midlands trio The Bad Flowers are clearly here to make a statement. This does seem the ideal bill for them to do it, as tracks like “Renegade Lover” navigate their way along the border between fuzzed up rock n roll and psychedelics. Capable of flexing their muscles too – new one “Hurricane” possesses a Cult-like meaty riff. Their debut album EP only emerged in the Spring, that they are able to produce a set this good already – and their last song doesn’t half sound like Jet – means The Bad Flowers have to be ones to watch bloom in future seasons.

It’s another trio to follow, and the South East’s Electric River seem like they want to make every second count. Heavier and more visceral live than on their superb “The Faith And Patience” record, there’s a Gaslight Anthem feel about the band. Clearly ambitious too, “In Your Name,” for example stomps around in widescreen, searching for some horizon it might just find. This is a band best when seen onstage, full of gritty rock n roll with its heart on its sleeve and a mean hook, songs like “Queen Of Hearts” are not those of a band that doesn’t have belief. With the gift – as with bands like The Hold Steady – of writing songs that are about small towns, but which resonate far beyond, Electric River are not taking no for an answer, as the insistence of “Leap Of Faith” proves here. Quite simply too charged up to merely go with the flow.

Nowadays you can see their songs on an insurance advert, but that’s the way the revolution crumbles. No doubt the royalty cheque softens the blow, as surely, does the acclaim. Not many bands get cited as influences by Bruce Springsteen and Nirvana. But then, not many bands are The Sonics. Before grunge, hell, before the White Stripes and all of the other heirs to the crown, The Sonics were up in Washington State plugging in, playing loud and sticking it to the man, man.

Now, they are older. Possibly wiser, but are most definitely still ready to rock. Back in existence since 2007, watching the five men who make up the band these days is like being transported back in time.

With a simple: “Ladies and gentlemen, this is The Sonics” from their roadie, the band are off and there’s nothing going to catch them, so all is like it ever was.

They are here, as original member Rob Lind explains, to plug their new “This Is The Sonics” record, their first studio output for 35 years. Not that if you didn’t know their chronology you’d realise, as new ones like “Sugaree,” “Be A Woman” and “Bad Betty” are basically timeless, throbbing rock n roll, and sit most comfortably with classics like “Have Love Will Travel” (which is the one you might have seen on TV).

The blues bluster of “You Got Your Head On Backwards” and the hedonism of “Boss Hoss” are simple and great fun and the take on Little Richard’s “Keep A Knockin'” is glorious.

Actually, The Sonic’s versions of other people’s songs are a highlight thought. “Money (That’s What I Want)” passes by in a blur, and “Louie Louie” by obvious contemporaries The Kingsmen is a song that’s virtually impossible to mess up.

Even the three song encore conforms to the “if it ain’t broke” maxim. And by the time “The Witch” brings the curtain down its easy to see why both The Boss and Kurt were fans.

Those looking for light and shade, pathos, reflection and all that dull stuff can look somewhere else. Tonight was about rock. And indeed roll. Oh, and fun.

They don’t make em like this anymore. Unless “they” The Sonics of course. Guitars, organ, drums, saxophone and harmonica screeching around, sweating at breakneck speed and all sounding like the most perfect bar band there ever was. What’s not to like?

That ladies and gentlemen, was The Sonics. Boom.