Birmingham show this weekend as Cave In Men hit the second city, and bring Conjurer along

Hailing from New York, Mutoid Man have swiftly established themselves as one of the leading forces in progressive underground music. Transcending the boundaries of a mere ‘supergroup’, the band has carved their own niche, as well as a loyal following, within the global scene.

2015’s ‘Bleeder’ represents a change for Mutoid Man. Building on their critically praised debut EP ‘Helium Head’, ‘Bleeder’ pushes the boundaries of what the band can do and see’s all members on form. Vocalist/guitarist Stephen Brodsky (Cave In) has been a stalwart of the early metalcore and post-hardcore scenes and is consistently referenced as an influence. Drummer Ben Koller has carved out a career in Converge as well as All Pigs Must Die and is widely recognized as one of the most technically precise and talented drummers of his generation. Expect one of the performances of the year from Mutoid Man. 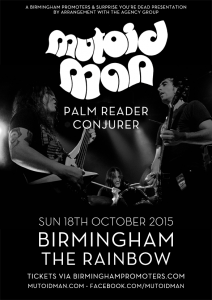 Despite origins within the hardcore scene, Palm Reader have recently pushed more into the post-metal realm, bringing their technical riffs out alongside Raging Speedhorn, Will Haven and more. Sounding like a mad hybrid of The Dillinger Escape Plan, Converge and Gallows, Palm Reader are bringing some serious grit to the billing. Their latest record, ‘Beside The Ones We Love’, received rave reviews including 9/10 from both Metal Hammer and RockSound.

Conjurer are rapidly moving away from the ‘local band’ scene and becoming a musical law unto themselves. This 4-piece fuses the elements of several extreme metal sub-genres to create a devastating and truly original sound. Their debut EP, recorded with Steve Sears (Hang The Bastard / Gallows / Palm Reader) is expected early 2016 but a lack of music hasn’t stopped them sharing stages with the likes of The Sword, Hang The Bastard, Anaal Nathrakh, Celeste or Sylosis since their inception in February.