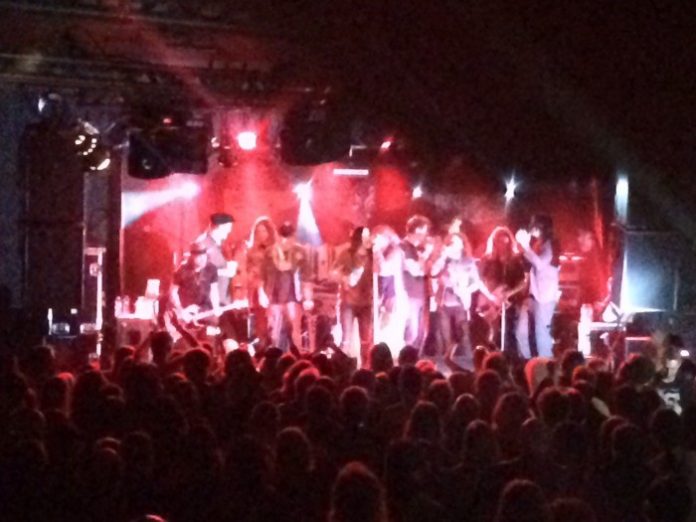 The Texas Flood, it turns out, aren’t from Texas at all. Although, as singer Tom Sawyer somewhat wryly notes: “We are from Swansea, that’s South Wales, right?.” Wherever they are from, it’s not been their day. They are here, their gear and their van is in Northamptonshire, where it broke down. Even with equipment equipment borrowed from Bonafide, there’s no disguising prodigious talent and great songs, and TTF evidently have both in abundance. There’s a confidence about the grooves to songs like “Rock n Roll Queen” and “Long Way Down” that even in the crowded classic rock market, will have this trio marked down as ones to watch. Rock n roll with a Southern groove and a Stones like attitude is very heart of what they do, and if “Bullet Proof” is a heads down hard rocker, then there’s a Black Crowes-ish feel to the finishing “Let The South Winds Blow”. Van trouble notwithstanding, this was a pretty successful trip.

When Sweden’s Bonafide play the wonderful “Dirt Bound” from the equally brilliant “Something’s Dripping” record tonight, a thought strikes MV. Rumours abound that Axl Rose is going to be the singer in AC/DC. That’s a car crash they should forget, and instead get Bonafide’s Pontus Snibb to do it – assuming he can spare the time of course. He’s in this band, Jason and The Scorchers and plays solo, but he’s superb at what he does – and he showed up on time. The quartet are surely to good to be this low down the bill, but then this is a stellar cast. It doesn’t faze them, though and the sheer quality of songs like “Hold Down The Fort”, “50/50” and current single “One Kiss” is there for all to see. Handily they’ve even got their own anthem, and “Fill Your Head With Rock” is fist pumping finery.

Hardcore Superstar were late replacements on this bill for Faster Pussycat. It was jolly decent of the organisers to pick a band that sounded like them to take their place. “Touch The Sky” and others have hints of Taime Downe’s mob, but in truth HS are probably a better live band than the Pusdycat’s these days. Much of that is down to the fact that vocalist Jocke Berg is a veritable dervish, and because of that can whip up a storm wherever he goes. A smattering of songs from their debut record – celebrating its tenth anniversary – with “My Good Reputation” and “Cry Your Eyes Out” still hitting home, but it doesn’t matter what age the tracks are, they are still great fun. “We Don’t Celebrate Sunday’s” turns out to be the perfect Saturday night song and if you are happy enough to give yourselves an encore of sorts then it might as well be “Above The Law”, and they remain the band who ever routinely dismantles the drummers kit as he’s playing the last song. It’s that kind of night.

The Quireboys main man – and constant over the last three decades of rock n roll madness – Spike is flustered. He’s forgotten what track three of the set is, the man to his right, Guy Griffin (the only other original member on stage) is poorly, the man to his left Paul Guerin has gone missing in the first track, where most might gloss over this, the singer decides the opposite is the way forward: “That was quite an entrance!” He exclaims. “I thought you’d forgotten your drink….”

Spike himself, dressed in a white suit, red shirt, head scarf and waistcoat, hasn’t changed a great deal in the near 30 years since the incredible debut record his band released in 1990, he is still is a fine mover and an even better frontman, even if his voice is slightly more cracked than it used to be. They play a track from that album “A Bit Of What You Fancy”, “Misled” pretty early in the set, and it still sounds superb, as does pretty much everything else they play, including a couple from their recent album, with “St Cecilia” in particular deserving its place in their pantheon.

Elsewhere, “Mona Lisa Smiled”, “Tramps And Thieves” and their mission statement “This Is Rock N Roll” show just how many magnificent songs they’ve put out over the years, and the trio which concludes the main set, “Hey You”, “Sweet Mary Anne” and “7 O’clock” are merely conduits for us all to roll back the years and prove we all still know the words.

The encore continues this theme, the massive ballad “I Don’t Love You Anymore” is followed by the downright dumb fun of “Sex Party”. This features all the evenings protagonists onstage, just having fun, and the sense of camaraderie makes the gig pretty special.

Spike probably knows this too, but he contents himself with a simple thought at the end: “I’ll see you at the bar……” And it should never be any other way with this British rock institution.