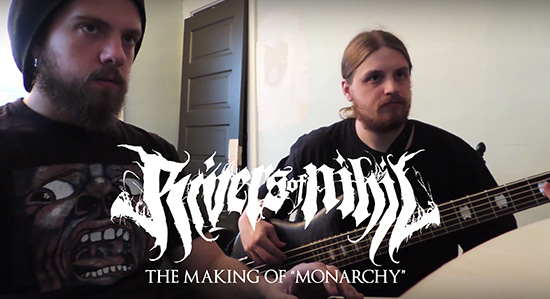 Join Rivers Of Nihil in the studio

August 21st saw the release of RIVERS OF NIHIL‘s sophomore album “Monarchy” via Metal Blade Records. A video documenting the making of the album has been released  and can be viewed HERE. The video was shot during recording at guitarist Brody Uttley’s home studio and recording at Atrium Audio in Lancaster, PA with Carson Slovak and Grant McFarland. This video gives fans an insight into the processes behind the tracking and concept of “Monarchy.”

RIVERS OF NIHIL have announced two CD release shows for “Monarchy” for fans wishing to see the new songs performed live for the first time and purchase the CD in person:

A full autumn tour itinerary will be announced soon.

A guitar play through video of the track “Perpetual Growth Machine” can be viewed HERE.