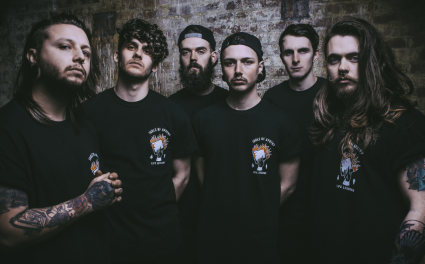 Idols Of Apathy are a highly dedicated six piece that create a sound, with colossal riffs and pounding beats, that is both dominant and ear shattering. The band ink truly forceful cuts, delivering their tech metal beatings with the real vigour and rampant passion that demands and commands attention.
Bursting out of Essex, Idols Of Apathy were formed in 2013, and from the get-go, they set about shaping their sound. The band soon delivered their debut single ‘Deceiver’ which picked up solid underground attention, with Ian Collins from Kerrang! coming on board to shoot the accompanying video. The sextet then began work on their first EP ‘Unheard Words’, which was recorded by Dan Keer at Avenue Studios. The EP picked up national recognition, which led to the band been featured in Kerrang! Magazine and to Rock Sound Magazine taking a track for their cover CD. The UK metallers continued their rise and lifted ‘The Devils Clock Tower’ from the record. Deciding to take the EP on the road, they set about playing a string of successful shows with the likes of Climates, Canvas, Lock & Key, Shields, Sworn In, Continents, Create to Inspire, Carcer City, Falling With Style, Prolong The Agony, and In Archives. 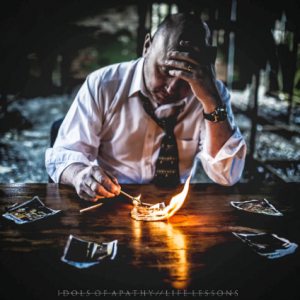 Idols Of Apathy took some time out from the end of 2014 until the middle part of this year. But the tech metallers now return to the fold bigger than ever and with a new dimension to their already blistering sound. The band drop their new EP ‘Life Lessons’, which is a concept record and based around some of the difficult times that one of the band members went through during the past year. The EP is a triumphant record and packs a gargantuan blow to the senses. Recorded at Avenue Studios (Hacktivist, Create To Inspire, Lock & Key, Martyr Defiled) the EP will firmly plant Idols Of Apathy on the national map. Look out for their explosive new video single ‘Bipolar’, out this November, and stay tuned to the band’s Facebook for further tour announcements.