The Guestlist To The Blacklist 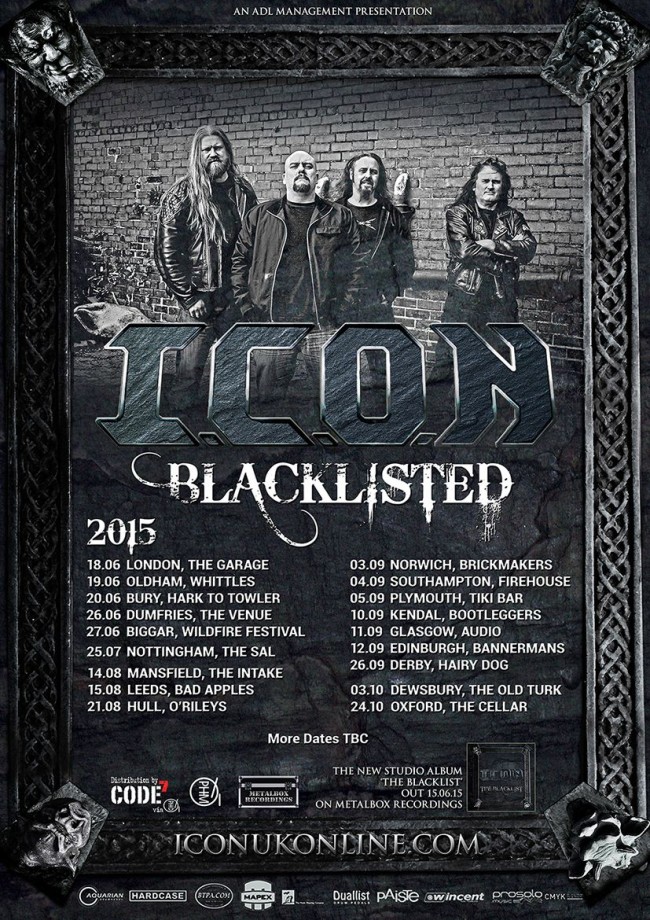 ‘The Blacklist’ is the long-awaited second album by British metal band I.C.O.N and is released on Monday 15 June on Metalbox Recordings. ‘The Blacklist’ sees the band deliver a more aggressive, comprehensive representation of what they are about. Years of travelling the length and breadth of the UK have finally culminated in a stable line-up that shares a common vision as this new album will testify.
“The new material was menacing, full of anger and dripping with dark venom; Mark Sager was on top form, spitting out aggressive growls, moving around the stage like a pro. The combination of both lead and bass from Scott Knowles and Reece Bevan just bled thunderous riffs and vibes with crushing chords and blistering lines. Larry Paterson was a beast on drums, pounding away as they blasted out new and classic I.C.O.N tracks…brilliant, just brilliant.” Get Your Rock Out – Rebellion, Manchester 2015
The tour dates include a London show with label mates Dendera at The Garage on 18 June & a headline slot on the CackBlabbath RACPA stage at Wildfire Festival, Scotland on 27 June.
The Garage: A very limited amount of £5 tickets are still available from the I.C.O.N webshop: http://www.iconukonline.com/webshop
Wildfire: Day and weekend tickets are available via http://wildfirefestival.co.uk
I.C.O.N are all about being on the road and playing as many shows as they can. Further dates are TBC.
Previous article
Glory Be!
Next article
Sweat Lodge Return With A Slow Burner