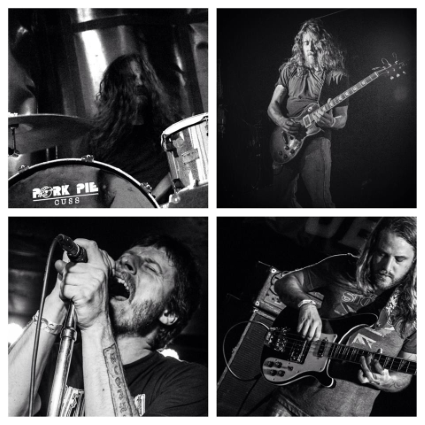 Having recently toured the US and Europe in support of their latest full-length album Mangled By The Machine, Portland stoners Ape Machine are set to hit the road this month in support of their new live LP/DVD combo release Live At Freak Valley on Ripple Music.

The daring new release was filmed and recorded at the Freak Valley Festival in Germany last year; an event that has proven to be a veritable showcase and ‘Who’s Who’ in the brave new world of upcoming psychedelic and heavy stoner-rock bands.The set features Ape Machine’s blistering hour-long performance in front of a sold-out festival crowd and serves up proof that the band lives up to their reputation of captivating and commanding live audiences.

In addition to the upcoming Live at Freak Valley release, Ape Machine has released three critically acclaimed full-length albums, two recent releases of which – Mangled By The Machine and War To Head – were produced by Ikey Owens (Jack White, Mars Volta, Mastodon) who also contributed keyboards to both albums. Owens was slated to produce the band’s fourth full-length this summer before his untimely death this past October while on tour with Jack White. In Ikey Owens’s absence, the band plans to record their next full length this April with long-time friend Jacob Golden producing.

Last year also found Ape Machine touring extensively, sharing the stage with bands such as Motorhead, Helmet, Orange Goblin, Crobot plus many others.

With their Live At Freak Valley release arriving on 26th May, a recent spring tour across the US under their belts, a new album in the pipeline and even more planned for later in the year, 2015 promises to be a busy one for one of the best new bands on the scene.