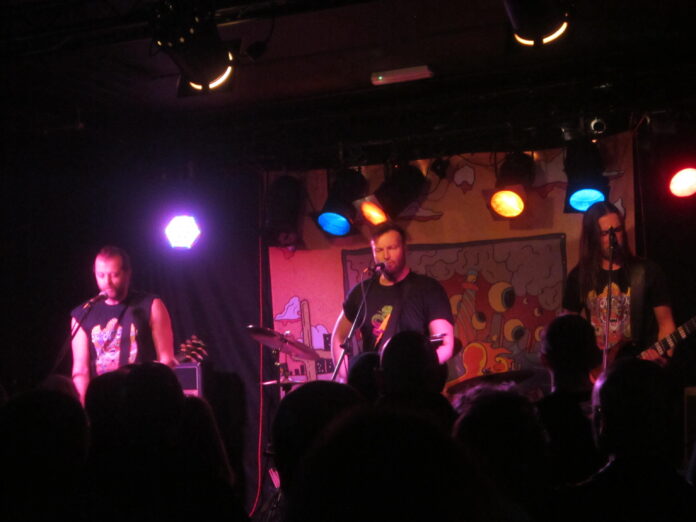 Tonight England`s second city welcomed The Dust Coda to the penultimate and probably the most intimate venue on this eight date Headline tour of the UK. I don`t think the guys really cared where they played but just seemed keen to get back out and play live and let everybody hear some of the cracking tracks from their superb `Mojo Skyline` album released earlier this year, in the flesh.

They snake through the packed audience to get to the stage and slam straight into four numbers from their recent release with the blistering `Jimmy 2 Times`,  thumping `Demon` with its bluesy swagger, a track I love `Dream Alight` which has it all with guitar hooks, riffs, and a melodic chorus and `Breakdown` a song that demands your attention.

The fellas come up for air and slow the pace down with the ballad like `Sweet Love Is Gone` whose lyrical content really paints a visual picture and allows singer and rhythm  guitarist John Drake to display what a stunning vocal range he has. Things heat up again with the scorching `All I Got` before John says, “you want a shit cover?” and proceeds to play their take on Blondie`s 1980 hit `Call Me` which I have to say really works.

We have a few bluesy rock numbers with `Sun Goes Down`, `I`ve Been Waiting` and the slow burn introspective and reflective `Rolling`. The home stretch includes the lighter `Bourbon Pouring`, searing `Down In The Valley`, `Best Believe It`, `It`s A Jam` and churning `Limbo Man`.

There`s no formal encore, just the guys asking us “You want one more??” and I think you can guess what the answer is and we have `When The Tide Comes In` to send us home with this heaving audience singing along and screaming along with the “woah woahs”

Adam Mackie, John Drake, Scott Miller, and Tony Ho who make up The Dust Coda have it all the looks, the moves, the songs and the chops and I felt we were witnessing tonight a band on the cusp of something really special. Hopefully, the new year will bring these boys the success that they truly deserve.