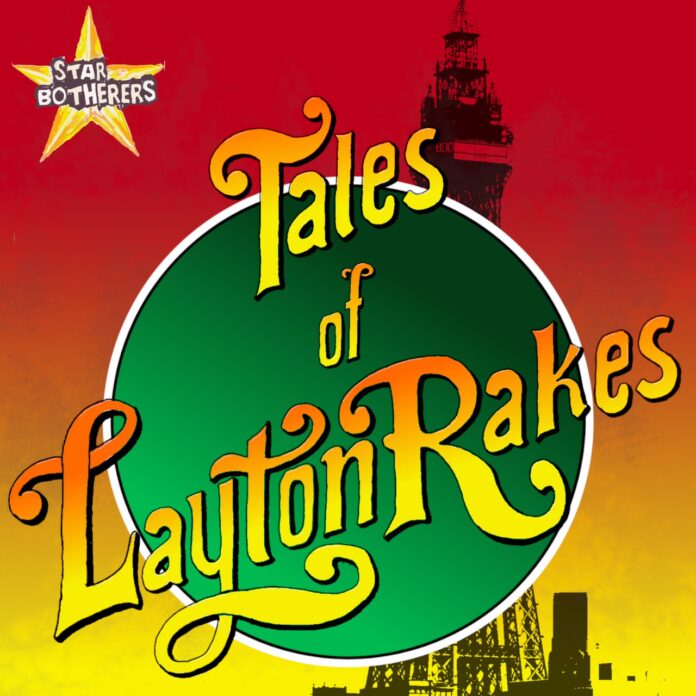 With reference to your song “Blackpool” on the otherwise excellent “Tales Of Layton Rakes” record. I can confirm that the Lancashire seaside town is NOT the spiritual home of Stanley Matthews as you so erroneously claim on one of its lyrics. He might have won them the cup in 1953 and he might have a statue of him at the Bloomfield Road Ground, but his only home – spiritual or otherwise – is Stoke on Trent. And if you like I’ll bore you with the story about meeting him in a lift once.

There, with that out of the way, and now we’ve put the leader of the band, Andrew Hawkins back in his place (ahem!) lets get down to the business of telling you why this is one of the best records of the year.

Essentially, its like this: if you like Folky punk (and I am sorry to get Ferocious Dog in so early, but The Star Botherers are even from Warsop) and you like lyrics that no one would think of (it would help if you were, shall we say, “left leaning” in your politics too) then, no joke, this is sensational.

It starts off with a little blues one, “13 Years In Oregon” that sounds like its about to break into “The Devil Went Down To Georgia” at any minute, and that’s catchy enough (and good enough) to get you interested.

The rest, though….crikey. “Spoons” samples a day in the life of pretty much any Wetherspoons from the 10 O’clock “suicide squad” to the scrap when “Town have lost again”. But there’s a line about everyone having a mobile phone to spend “more time together, alone”, and that’s about right.

Then there’s “Blackpool” – which apart from the egregious slight on the oldest football league club in the UK (have I made it clear enough I support Stoke City yet?) is stunning. I’ve been in the Layton Rakes pub, too. I went to a stag do with a bloke from work about 25 years back (I hate that sort of thing but I was trying to impress a girl and show how “normal” I was) I fell over in a strip club. I was sober (I don’t drink). And I went home a day early. Write a song about that, Andrew…..

Indeed, this record just keeps getting better. “Let It Stand” discusses the statue to that bitch who said there was no such thing as society, which was scrapped. It’s a song that Billy Bragg in his red wedge days would have been proud of.

Best of the lot, though is the singalong anthem “Just Around The Corner”. The tale of a bloke that bought his council house in the 80s and what happened after. It’s up there with the aforementioned Ferocious Dog’s “Slow Motion Suicide” as social commentary of the awful consequences of capitalism on northern towns.

If that’s the best, then make no mistake, there’s nothing here that isn’t brilliant. “Another Lidl Song” has a tinge of the left field Rob Heron about it, as it talks about the cutbacks people make, “Kyle And Norton” imagines a world where they job swap and finds celebrities and council estate kids are just the same. It’s the human condition.

“Freethinker” will engender a moshpit, and its basically a Levellers song without the whiff of hummus, let’s be honest, “Swearing In Songs” made me laugh out loud on the M6, and it takes a lot to do that. In fact, I am saying right now that “if you want a number one, duck, take a leaf out of Elton John’s book” might be the line of the year.

There’s more of the Levellers flavour on the fast and furious “Silence Is Acceptance” which asks the question: What have you done to change the things you moan about? “He’s Got Dreads” is another one that verges on the genius (“he’s a vegan, well that’s obvious”) and everyone listening to this knows exactly the sort of person we are talking about, here. That’s the skill of the record actually. The stories are so universal, that there’ll be a connection anywhere and a wry smile.

“Oddly Excluded” was written by Pete Drake, and all I am saying is the way he gets socks paired in the draw made me blush. Plot twists don’t happen in songs. They do here.

It ends almost where it started. On some foreign land, a sea shanty almost, that The Longest Johns would be proud of, and it’s odd that a record so British (English more specifically) is bookended in the way that it is, but whatever it does, “Tales Of Layton Rakes” is like nothing you have heard this year. No one uses words this well.

So good, I’ll forgive them for knowing nothing about football, frankly.