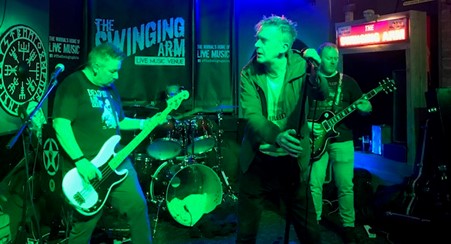 First up are The Dregs a punk band from Birmingham formed in about 1980 and resurrected in late 2014. As ever I can’t comment on something I am in. The guy who does the ‘Outta Limits’ show on New Brighton Radio & Vintage Radio which plays punk, ska, Oi and Indie described The Dregs as a very 1977 punk band. A member of Half Man Half Biscuit who was in attendance thought a cross between Alternative TV and Hawkwind.

Although I have known guitarist and singer Hocky for many years, for some reason I have never seen Birkenhead punk band Bite Back which he fronts. They have many years under their belt and influenced by the likes of the Damned and the Ruts and early punk bands.

They open with the excellent ‘25 Minutes’ with its additive chorus which they all belt out in harmony. This is followed by real rocker ‘Pain Away’ which reminds me a bit of the Cockney Rejects. There is no 3 chord thrash here, their songs are well constructed with some complex changes, and guitar, bass and drums that complement each other throughout. As they say, they like to mix it up a bit.

They are great players and the way the bass player plays and sings you would have no idea he used to be the drummer unless you knew.  They work their way through a fantastic set with choruses many of the locals know and sing along to, such as Open Your Eyes’ and ‘End of the Line’. The set concludes with the blistering trio of ‘You Are The One’, ‘Addicted to Pain’ and ‘The Truth’. I don’t know why I never saw them until now but will no doubt be seeing them again very soon.

As the drummer wasn’t available today, they play as a four piece with the rhythm guitarist switching to the drums and making a great job of it. They play the reggae-tinged tunes very authentically and sound at times like a cross between the Dead Kennedy’s, Clash, and the Specials.

‘H Eyes’ (not a Ruts cover), and the great true story that is ‘Section 24’, move between punk and reggae/ska with ease and you can see Rancid influences as well as metal like guitar solos. Album title track ‘Take a Look Around’ and ‘One by One’ were class.

They have great banter with the crowd and clearly love what they do. While their songs have serious messages and observations, they are also up for the crack. They finish with ‘Off The Fags & Booze’ and throw in a version of the Clash’s Complete Control, billed as they only cover they know (I doubt it) which brings a great afternoon to an end.

I will make sure I see them again. If they can play like this as a four can’t wait to see them as their usual five.

No better way to spend a Sunday afternoon

Previous article
LANDSDOWNE, HANDS DOWN
Next article
SENDING OUT AN SOS