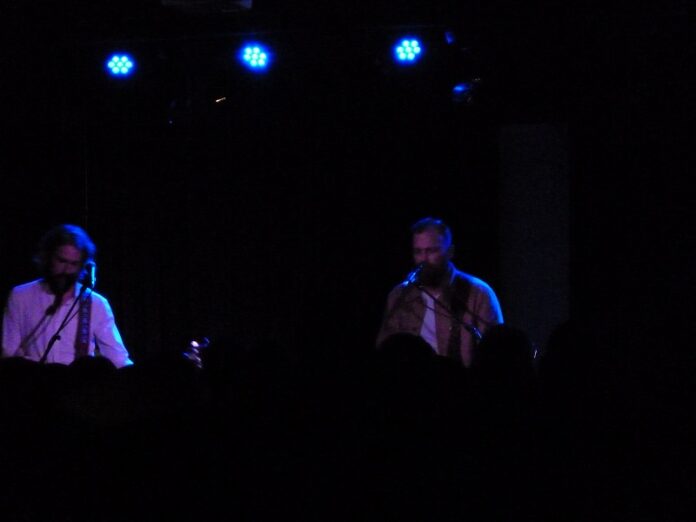 Having reviewed Mariel Buckley`s latest release `Everywhere I Used To Be` and really loved it,  I thought I’ll ever get to see her live but didn`t realise that the album was on the Bros. Landreth`s own record label and they have chosen this country-folk artist to accompany them on their dates in Europe. Mariel on acoustic guitar is joined tonight by Ryan Dyck on pedal steel for this brief set which begins with the wonderfully descriptive `Neon Blue` and the lovestruck `Whatever Helps You`. The singer shares that her songs are mostly written about driving, drinking and being sad but that really underplays her narrative strengths as is emphasised on the insightful `Driving In the Dark`. We have a cover of Blaze Foley`s `Clay Pigeons` and another cut from the new release with `Driving Around` and that`s as much as we can hope for tonight. This set might have been short and sweet but this intimate audience really seemed to appreciate what they heard.

It seems that it was almost inevitable that having a dad as a musician, brothers Joey and David Landreth would follow in his footsteps. These Canadian alternative country and folk musicians are over in Europe to promote their latest offering `Come Morning`. The album is played almost in its entirety with a few older tracks and a couple of covers thrown in to break things up.

The guys open with the driving country belter `Runaway Train` from their debut album before we have a couple from the latest release with the soulful slow burn of `Stay` and `Drive All Night` on which the brothers share some wonderful harmonies. We have numbers old and new which had tinges of the early Eagles and Steely Dan.

There`s a fairly emotional version of title track `Come Morning` performed by Joey who spoke about the song and it`s relevance to his young daughter. The duo spoke about handing their debut cd to “whispering” Bob Harris in Nashville and his support and encouragement to visit the UK as they play the title track of that album `Let It Lie`

Mariel Buckley joins the brothers for a cover of Vince Gill`s `When I Call Your Name` before the home stretch includes amongst others `After the Rain`, `Where Did I Go Wrong` and `Shame` on which David leads the vocals and manages to forget the words before recovering. `I Am the Fool` and `Our Love` close out the set. It`s not long before the duo return for a two song encore which ended with a cover of Little Feat`s `Two Trains`

At times tonight I felt that the intensity of the songs shared was quite overwhelming and as I reflect back I can maybe appreciate more the strength of these numbers. The duo have a few more dates in the UK before moving on so if you to want to be overcome emotionally with some great music, you`d better hurry.