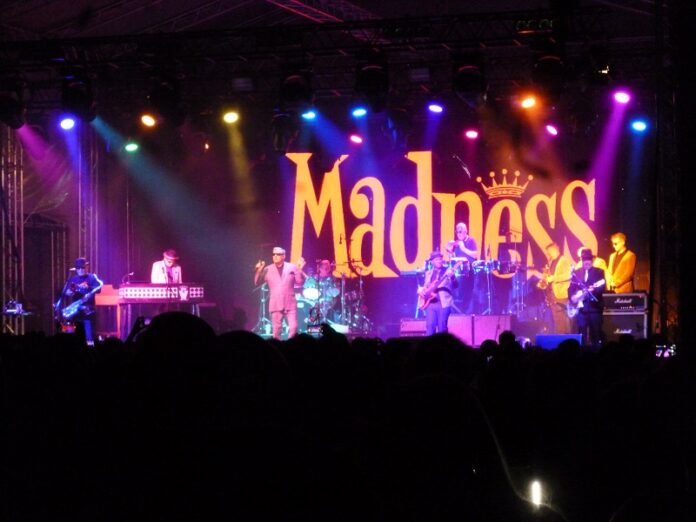 It must be twenty years since my one and only attendance at a racecourse. I had won a double header in The Irish Post newspaper which included a trip to Twickenham to see England v Ireland and at day at Cheltenham. I took my Dad, who was from the West Coast of Ireland and pretty clued up on the “Sport of Kings” to Cheltenham and he won six hundred pounds. He gave me fifty pounds and said “don`t tell your mother I had any winners” and as that was about a weeks wages at the time, I took the hush money and later confessed to the priest, so all was well once again with the world.

Sadly today, my Dad is no longer with us as I arrive with a good friend just in time for the last race and to sample some of the pre-gig ambience. We met a few lads from Merseyside who although hadn`t had a good day race wise, were nicely lubricated and were looking forward to seeing England`s `National Treasures` along with another twenty five thousand or so that they reckoned were there today.

The last race concluded, we enjoy some warm up cuts through the pa system such as Toots and the Maytels `Pressure Drop` and The Beat`s `Mirror In The Bathroom` and then out comes pop and ska legends Madness to the Pearl & Dean cinema titles music. They head straight in to the Prince Buster classic of `One Step Beyond` as the mayhem begins. `Embarrassment` and `The Prince` ring out before the band come up for air and I reflect on the last time I saw these guys at Tiffany`s in Coventry`s precinct in April 1980 with the Go Go`s in support.

The backscreens show us the band and various associated scenes as the nutty boys share piano led `NW5`, `My Girl` and `The Sun and the Rain` have this ecstatic audience singing and dancing along.

Suggs shares that the boys were really busy during the lockdown and managed to compose at least two numbers, one of which the calypso tinged `Baby Burglar` gets an airing. One of my favourite tracks `Wings of a Dove` rings out and everybody is clapping along. There`s a musical interlude as the band play `Return of the Los Palmas 7` before some “newer” numbers with `Lovestruck` a song about trying to get home when you`re wasted, `If I Go Mad` the other lockdown number, the classic `Shut Up`, `Bed and Breakfast Man` about a guest you can`t get rid of and `Mr. Apples`. There`s a break in proceedings as Suggs spots somebody who isn`t well in the crowd and the band take leave until they are looked after.

I`m sure any other band would have struggled to regain the atmosphere after an enforced break but this is Madness who then just blew the place apart with the final few numbers which included the timeless masterpieces of `House of Fun`, `Baggy Trousers` and `Our House` before leaving us all with the heartening Labi Siffre cover `It Must Be Love`.

There`s a brief lull before the fellas return with a two song encore with another Prince Buster tune `Madness` and finally `Night Boat to Cairo` and that`s the evening`s entertainment over and thousands of punters head for the exit with their red fez`s on their heads.

A cracking night was had by all and I have to applaud whoever dreamt up the concept of a “Day at the Races” and a gig to round it up. But you`d be hard pushed to find a better band to end a day out than the Camden Town`s “Nutty Boys” as they welcomed us into their house of fun for the evening.